Another 12 months have come and gone almost in the blink of an eye. So what’s actually happened this year? We take a look back…

Oh, 2012. We’re not going to lie – you’ve been good to us. It’s been a year of incredible highs, mad memories and plenty of laughs. But what have been the best bits?

The biggest event of 2012 almost goes without saying – it’s got to be the London Games! This summer, Britain was consumed by sporting fever as we ditched work, friends and summer study projects for the Olympic and Paralympic coverage on TV.

First of all, we got caught up in the excitement of the torch relay, but it wasn’t long before Sir Chris Hoy, rower Heather Stanning and tennis ace Andy Murray were doing Scotland proud. We embraced a new love for dancing horses, discovered the joy of wheelchair rugby, couldn’t stop doing the Mo-bot and nearly collapsed when the Spice Girls reunited at the end of it all, all the while falling a little bit in love with the First Lady of Sport, Ms Clare Balding. The greatest part of London 2012? It got us talking about sport, thinking about sport and wanting to give it a go.

It wasn’t just the Games that got us feeling patriotic. The Queen’s Diamond Jubilee in May not only got us some extra time off school, college, uni and work, but reignited our love for afternoon tea, had us waving flags in the street and even tolerating Tom Jones performing on the telly. Rule Britainia!

It’s been a big year on the news front too. 2012 is the year that political bods decided that 16 and 17-year-olds in Scotland would be able to vote in the upcoming referendum on independence, showing that politicians are slightly more willing to hear what young people have to say. They also listened when it came to the new laws surrounding gay marriage – the Scottish Youth Parliament was one group which campaigned the Government to make it legal.

Bizarrely, some of the funniest news stories of the years have come from usually-dowdy politicians. From Boris Johnson getting stuck mid-zip wire and beaming at the crowds turning into a Tumblr sensation to Nick Clegg’s grand apologetic speech being autotuned and mixed to a dubstep beat before entering the music charts – is politics the new standup? 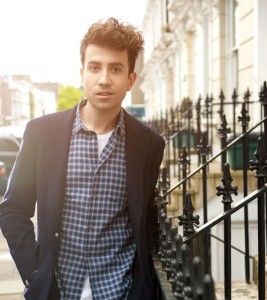 It’s been a year of lots of changes in the land of celebrity too. The One Direction boys got even bigger, conquering America and sending teenage girls (and their big sisters) into a frenzy all over the world. Elsewhere in music, we were won over by newcomers fun, embraced a new dance craze spawned by a Korean bloke called Psy, Scotland’s own Nina Nesbitt showed the world what we’re made of and X Factor reject Aidan Grimshaw bowled us over with his haunting melodies. All in all? A great year for music.

The UK’s biggest radio show, Radio 1’s breakfast slot, had an overhaul after self-proclaimed saviour Chris Moyles stepped aside to let friend of the stars Nick Grimshaw take over. Die-hard Moyles fans have been sceptical, but we love Grimmy’s new music-focused vibe.

Hearts were shattered when celebrity power couples like Seal and Heidi Klum parted ways, Kristen cheated on Rob and who can forget Katie Holmes walking out on Mr Celebrity himself, Tom Cruise?! But there’s been plenty of happy news too, like a baby for Adele, Little Mix’s Perrie and 1D’s Zayn got together and McFly’s Tom wed his long-term girlfriend. All together now – ahhh!

Of course, it’s not all about the glitz and glamour of celeb-dom. Young Scots have been doing amazing things this year. Duncraig High School in East Kilbride won an award for their work targeting sectarianism in school. The Young Scot Awards recognised the country’s hardest-working, big-hearted young people, from young disabled poet Adam Bojelian to Erin McNeill, the burns victim who hasn’t let her horrific experience hold her back. The incredible Alloa girl entered a beauty pageant this year to show the Facebook trolls who mocked her scars that beauty comes in all shapes and sizes.

Then there’s you, our readers. This year, more Source readers than ever before have contributed to the magazine’s pages, written in with ideas and even joined us for work experience. Thanks to you, we even got shortlisted for a top award at the Scottish Magazine Awards. Not bad for 12 months’ work.

And, just like that, it’s almost all over. There’s a few weeks left to cram in even more magical memories, and then it’s onto 2013! Can it top the terrific 12 months we’ve just had? We’ll just have to wait and see…

The Channel 4 hit has had us gripped. Claire Danes gives the performance of her life.

Series one was ace, but series two? We bow down to you.

Keith and the gang never fail to disappoint. This year’s been a belter!

There’s not much you can say about this track other than – where has K-pop BEEN all our lives?

2. Taylor Swift – We’re Never Ever Getting Back Together

The ultimate breakup song from the queen of the payback track Ms Swift.

3. Twin Atlantic – Make a Beast of Myself

Is there a better song to scream along to in the car? No. No, there isn’t.

AND THE BIG SCREEN

We didn’t think you could get any better than the Dark Knight. We were wrong.

Another cracker from Bond, James Bond. The theme song from Adele was pretty awesome too.

3. The Perks of Being a Wallflower

What has 2012 meant to you? Whether it’s the year you started uni, met the love of your life or saw the gig that changed you forever, we want to know. Send us a tweet to @SourceMag and we’ll share the best memories with our fabulous followers.