When Andy Brown, Joel Peat, Adam Pitts and Ryan Fletcher’s guitar-based ‘meaningful pop’ started getting radio play last year, we couldn’t help but wonder where Lawson had been all our lives. After four years of gigging, writing and recording, the gorgeous foursome have finally released their debut album, with praise pouring in from critics and fans alike. Source’s Lindsay Cochrane caught up with the guys at Glasgow’s HMV, before they embarked on a mammoth signing sessions for their dedicated fans…

How are you getting on here in Glasgow?

Andy: Great! It’s one of our favourite places to visit, especially for a gig – we’re doing a little performance before the signing. Everyone’s mental!

Joel: The last tour, we started up here, everyone was crazy and they sing so loud as well!

Andy: Amazing. Everything’s so, so good at the moment. We’ve got the album out, we’ve had three top-ten singles, everything’s just been great.

Your debut album Chapman Square is out right now. What can we expect on the album?

Andy: A mix of everything really. It’s mostly guitar-led, there’s a lot of acoustic guitar in there. It’s very meaningful, very emotional – it’s all real, all real life experiences that have happened in our lives. It’s the same sort of vibe you’d expect from bands like the Script or Coldplay, Maroon 5 – that sort of feel to it. It’s good. Hopefully you’ll like it.

And you’re here to sign copies of it! Are you looking forward to meeting the fans today?

They’re queued up round the corner!

Andy: Really? Oh, brilliant. We already met a few of them this morning, we went to the Daily Record and we met a few outside there. It’s nice, they’re always so sweet. They bring us loads of presents and stuff. We’ve got very loyal fans up here.

Adam: There’s a group of girls who literally come from all over the country to see us, that’s really cool.

What makes you different from everything else that’s in the charts at the moment?

Andy: I think we’re different because there’s not many bands around who play their own instruments, write all their own songs who are as young as us at the minute.

If you weren’t in Lawson, what band would you like to be in?

Adam: Kings of Leon would be quite cool.

Joel: I’d like to have been in one of the old rock and roll bands – like the Stones, just to experience that whole era in music.

Andy: If they were still going, I’d pick the Beatles by far. But nowadays, Kings of Leon every time. They’re a proper rock band.

What’s life like on the road for you? Is it proper rock ‘n’ roll?

Andy: We spend a lot of time in a van now, to be fair. But it’s good because we get on so well. [laughs] We chat a lot about life! We try answer life’s big questions!

Ryan: We talk about love!

This is shattering the illusion, guys!

Joel: Well, this week’s been a big week.

Andy: Yeah, we went out on Monday and we… We had a big night in London, had some rock ‘n’ roll moments then.

Joel: I woke up in my boots and my jacket.

Andy: Half the time, we’ve got to be up really early to do interviews and stuff, so you can’t really afford to party too hard. You’ve got to be on it. We’re quite professional that way. We watch a lot of movies.

Adam: The great thing is, now, that we’re moving up from having the van and the next tour we’re doing, we’ve got our first actual tour bus! A week today, we’ve got a double decker with all the beds, we’ve got two living rooms, PlayStations!

Ryan: We’ve been dreaming of that for years, having a tour bus outside the venue. We’ve never had that. So we’re very excited about that. Then it could get more rock ‘n’ roll.

Joel: When you’re on a tour bus, that’s when it starts! 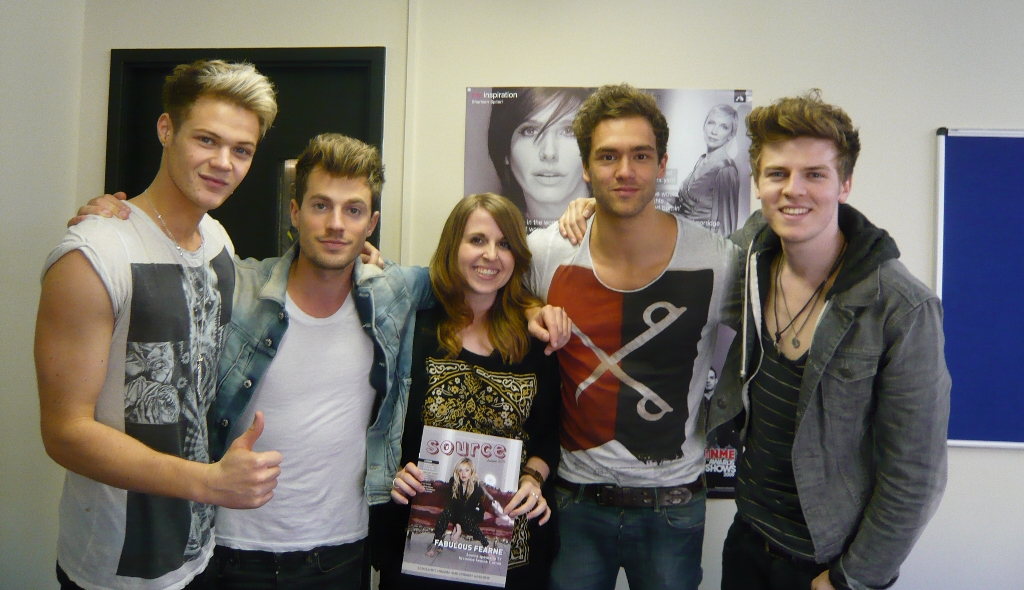 Obviously, since things started to take off for you, you boys will have been getting more female attention. How are you coping with that?

Ryan: You don’t really ‘cope’ with it, do you? You just love it every day. We feel really lucky to have so much support. We’re attention seekers.

Would you ever date a fan?

Adam: Depends what you mean by ‘fan’…

Joel: I’ve been with a girl who’s liked the band. It’d be awkward if your girlfriend or whatever didn’t like the band. I’d say they’d have to be a fan of the band.

Who would you say is the best looking member of Lawson?

Joel: That’s for the general public to decide.

Andy: [leaning over to stroke Adam’s face] He’s got that stubble as well.

Adam: But I’m three foot smaller than the rest of them, and obviously height is one of the main criteria for being an attractive person.

Andy: If Adam was as tall as us, he might be the best looking man in the world.

Adam: I don’t think that would be the case.

You have had a massive year – what’s been the highlight?

Joel: This album, I think, has been the highlight of my year. Between recording it and playing the songs live, everything to do with getting this out has been incredible.

Adam: To be together four years and get to release Chapman Square, yeah… It’s great.

Andy: It’s doing well in the midweek charts as well. At number three at the minute – we’re delighted about that.

Adam: If you’d told us, four years ago, that our debut album would be at number three in the midweek charts, we’d be like, “Ahh, shut up!”

Where do you hope your career goes?

Ryan: We want to tour the album all over the world. We just want to tour. To do bigger venues. More albums. Keep going.

Adam: We watched the Script’s documentary recently, and they were doing arenas in places we’d never even heard of. We want to do that. Because we’re a live band as well, the main part is gigging.

Finally, why should Source readers buy your album?

Ryan: It’s different to everything else that’s out there at the moment.

Andy: If you like bands like Coldplay, The Script, Maroon 5 – which a lot of people do – we’re for you. If you like honest music – it’s very honest.

Ryan: It’s things about our lives.

Andy: It’s like stories. Every song on there is a story.

Adam: It’s more of a book than an album.

Joel: It’s a book, read by Andy Brown, with melody.

Adam: I like it! My mum likes it as well. And my nan likes it.