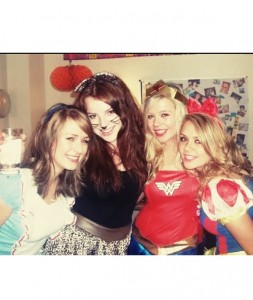 The countdown is on – in just a matter of weeks, thousands of Scots will be leaving their memories of sixth year behind them as they stride onwards and upwards university and life as a fresher. So what do you need to know before you head onto the next stage in your life? Recent graduate Kirsty McKenzie shares some wisdom with a letter to her fresher self…

Just pause Gossip Girl for one second would you; I have something to say. I know you’re awful with confrontation (you’ll get over that mostly) but this is important. You’re about to go to uni (yay!) and not to sound too much like Mum or anything, but you’ve got a lot to learn.

You’re nervous, and that’s OK. In fact it’s GREAT. You are about to be thrown completely out your comfort zone and meet tonnes of people from all over the world, from all sorts of backgrounds and they’re going to force your eyes wide open. Speak to everyone but only surround yourself with people that make you feel totally at ease: you’ll trust them wholly, the jokes will come easily and they’ll happily call you out for being an idiot. If people disappoint you or break your heart, it’s OK to walk away, but give people chances. Have an open mind; be fast to listen and slow to talk (I’m still working on that for us). See those girls in the picture up there? Four years later they’re still going to be your best friends, biggest cheerleaders and ill-advised advisers. Nine times out of ten when you think you are having a full on mental breakdown, you really just need to sit down with them for a pot of tea. Sometimes you’ll need something stronger. You’ll always need biscuits.

Don’t fight with Mum and call her at least once a week, even if it’s for ten minutes. She wants to hear that you’re OK and looking after yourself now she’s not there. She has great taste in wine and is usually right about most things. Listen to her next time she tells you not to buy that jumper. It really is hideous.

Go to the gym and don’t eat what you want just because you can. Admitting that 50 orange Jaffa Cakes doesn’t cover your five-a-day will be a big learning curve for you. Surprisingly, so will the challenge of making cheese sauce. Don’t exist on toast, potato wedges and mug cakes even though they’re easy to make. By the time you graduate you’ll be making full roasts and ripping recipes out of magazines but for now, cook some stir-fries and big batches of chilli that you can freeze. When in doubt, buy eggs – scramble them, poach them and omelette them. This will be a big thing for you.

Don’t do all-nighters or drink three Red Bulls before an exam – you’ll see spots and your grade will be rubbish. Go to class even when it’s boring, even when you’re behind and ESPECIALLY when you’re confused. Speak up, ask questions and don’t be afraid to be wrong. That’s how you’ll learn. Hundreds of people will be smarter than you; they’ll know about fishing tariffs and java script but you can tell them which pizza place serves the peperoni under the cheese.

Get on Twitter (it’s going to be big) but don’t obsess about it. Ditto Facebook and Instagram. Use it for keeping in touch with friends and for procrastination, but don’t let likes dictate your life. Change your profile picture only when you look deliriously happy, not when you find one that has a weird angle that makes you look slim-ish.

Never make excuses for what you like or what you want. People are going to say that FOMO is a thing but it’s not – you’re smart enough to know when you need to catch up on sleep, save some money or work on that deadline. That said, don’t be scared to take some chances, go to parties in strange flats and join sports teams and obscure societies. Do work experience, as much as you can– you’re going to love it. And when people tell you there are no jobs left in the media industry smile to yourself and think: ‘That’s fine; I’m coming after your job.’ Be kind to yourself and others, experiment and take chances.

And one last thing: please, please don’t get that fringe you’ve been thinking about.