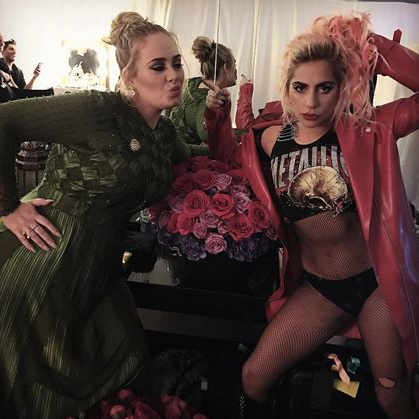 While we were all snoozing, across the pond all the weird and wonderful folk of the music world were shimmying down the red carpet and making their way to the Grammys 2017.

As always, Beyoncé stole the show with her nine nominations, pregnant belly and jaw-dropping hologram performance. Even Adele (who swept up 5 awards FYI) was in awe of Queen Bey. She even broke her own award in tribute to the Lemonade singer – talk about being a committed member of the Bey-hive right?

So of course, we have to give our number one spot to Mrs Carter. It was her first appearance since announcing that she’s pregnant with twins in THAT Instagram post. Supported by sister Solange, hubby Jay, mum Tina and daughter Blue Ivy,  Queen B took to the stage for a show-stopping performance with the theme of motherhood. And it was GLORIOUS.

There was one person who wasn’t quite swept up by Bey-magic. Some fans are claiming that Rihanna threw shade at Beyoncé by not reacting to Beyoncé being awarded Best Contemporary Album. Camera show Riri (who was also up for the same award) applying lipstick and looking away bored as Beyoncé’s win was announced.

But that’s not all. The internet also can’t seem to get enough of Rihanna’s gem encrusted flask. Seriously, Rihanna was not playing by the rules this year. And can you blame her? The Work songstress was up for a whopping eight awards and came away with nada.

Rihanna and her flask made my night pic.twitter.com/9B59uvNWlR

CeeLo turned is back on green for the night and went full on metallic for this bizarre head-to-toe gold look.

The 42-year-old singer used the Grammy’s as an opportunity to reveal his new alter ego – Gnarly Davidson – before making a swift exit in the Batmobile. Whatta guy.

Rap’s favourite cheeky chappy, Chance The Rapper, was on great form on the night. Not only did he win Best New Artist,  the unsigned artist also went on to win Best Rap Album and Best Rap Performance, beating the likes of Kanye West and Drake. Impressive, huh?

It’s safe to say that James Corden did the UK proud and NAILED IT as host of the 59th Grammy Awards. Not only did he shock everyone with his epic surprise fall, the host also surprised us all with a special Grammys edition of Carpool karaoke, featuring J-Lo and Blue Ivy.

The legendary pop star, who died in January 2016 from cancer, tied with Adele for having the most wins on the night. In total, the late singer picked up an incredible five posthumous awards.

Following his death he was nominated for five honours, including Best Rock Song for Blackstar, and he was awarded with all of them.

Adele wouldn’t be Adele if she wasn’t dropping F-bombs on stage. But this time the British singer was swearing for a good reason –she wasn’t happy with the way her performance was going, telling the audience: ‘I can’t mess this up for him’ and stopped everything in the middle of her George Michael tribute. She started again and, of course, had us all welling up with her incredible performances.

What was your favourite moment? Let us know on Twitter!