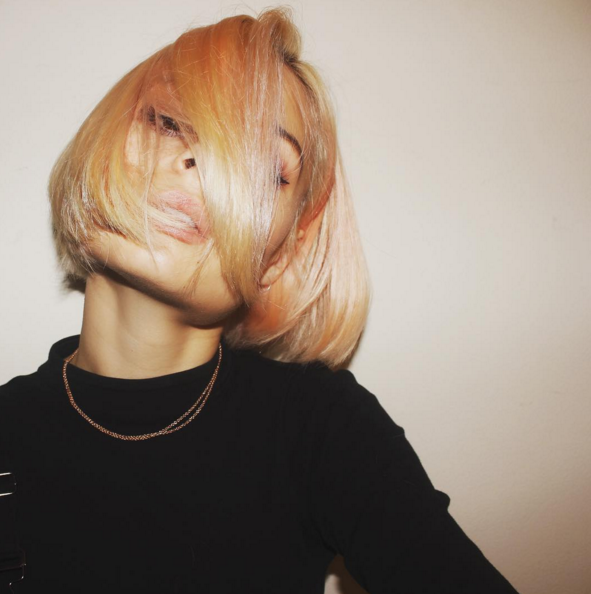 We caught up with Scottish star Nina Nesbit (who’s just signed a new record deal with Cooked Vinyl) to talk new music, growing up and writing songs for her fans.

You started singing at a really young age – was it always something you knew you wanted to do or did you have a Plan B?

As soon as I could read and write I wanted to be an author but I then found myself getting bored of the story by the time I got to page 10 and realised perhaps poems would be better. I then started playing piano at 10 and put the poems to basic chords and that’s how songwriting came about. I was a pretty bad singer as a child, but I loved it and just kept singing until developed my own style.

I never really thought I could be a singer as a career, coming from a small village in Scotland. I didn’t really know how I’d get out there, but I always dreamt about it. I think it’s good not to have a Plan B because then it’s sink or swim and you really have to push yourself to succeed.

i'm excited to announce I just signed a new record deal and my next album will be released on Cooking Vinyl, home to many of my favourite artists! 🍾

How have you and your music changed since your debut album?

I feel like that album was made by someone else, you grow up soooo much between 16-21. It’s weird looking back but I’m so grateful for all the experience now. I feel like I know myself so much more and have learnt lots of about my own songwriting too. On my first album it was all about the lyrics and I never even thought about writing strong melodies, I just fitted the words to the music. Now I realise melody is probably the most important part of the song and the part that people connect to initially! So I definitely take a different approach now. I try to make sure every area (lyric/melody/music) is equally as strong. I also think I’m a lot more confident in my own music as well. I’m not writing to tick boxes – I’m just trying to create something that feels 100% like me and different to everything else.

What advice would you give to your younger self?

Stop focussing on what everyone else is doing and focus on you, because that’s what makes you stand out in the first place.

Currently writing a song about how I'm always looking too far ahead. And when I look back I realise how many things I've experienced. Well deep.

What can fans expect from you next?

A new album (aaagggghhhhh). I’m so so pleased with it, I think it’s the best music yet.

You made the decisions to break away from your label earlier this year – was that something you had planned to do for a while?

It was something I knew had to happen for a long time but something I knew was going to be an absolute nightmare to do! It was a very mutual thing. I’m grateful for all the work they initially put in but you have to make a change if something doesn’t feel right.

Being independent has opened so many doors for me, I feel the most creative I’ve ever been. It’s been nice to just be completely on my own and have time to figure out exactly who I am and what type of music I want to make. I feel like that’s when the best stuff comes. I know that I have to work my absolute hardest because only me and my manager are going to make things happen and that’s really exciting!

Will breaking away from Island Records allow people to see the real you?

I think it’s just a different me, I’m just grown up now and the new music reflects that.

You just release of an EP featuring songs inspired by your fans’ own stories. What motivated you to do that?

I just wanted to put something out whilst I was busy writing my second album which took a while to write. I thought it would be a fun project and something for the dedicated fans to enjoy whilst being so patient.

It was great, I got sent thousands of stories – it was a real pleasure to read them all and get to know the people behind the social media accounts.

How different was it writing from other people’s perspective rather than your own?

It was quite challenging actually because usually when I write about my own life it just comes out naturally but because I hadn’t been to the places or met the people I had to use my imagination a lot.

How important is it for you to stay connected to your fans?

That’s how I am where I am so I think it’s very important! I love seeing familiar faces at gigs, it’s nice to know people stay with you on the journey.

You’ve mentioned that a lot of your fans have spoken to you about personal problems like anxiety and depression – do you feel a responsibility to be a role model for them?

You wear a lot of hats – from songwriting to modelling to performing– what’s your favourite part of your job?

Songwriting OBV! Performing is fun but also quite stressful.

Scots are known from being a great crowd – why do you love coming back to Scotland to perform?

Everyone is always so up for it,  I love it! It really does feel like home coming back and hearing the accent. I miss it a lot.

Are there any musicians in particular that you look up to, or any career that you would like to emulate?

I love so many different types of music and artists I couldn’t really pick. I look up to artists in general, whether they are singers, songwriters, performers, poets, writers, painters, designers etc. I’m constantly inspired by any medium of art

Pitched vocals and a drop (LOL).