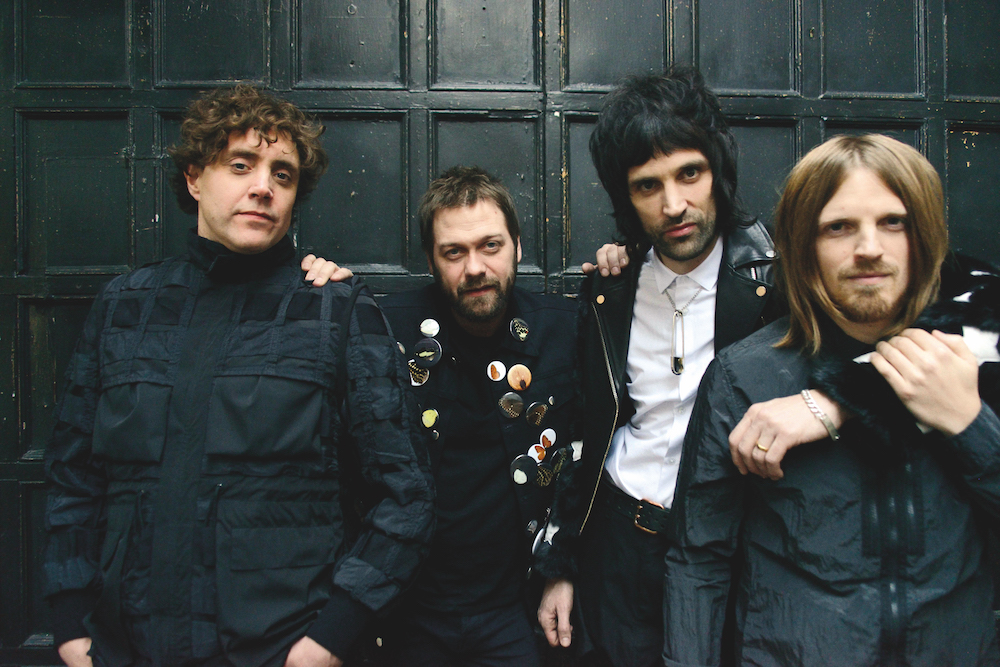 Celebrating their fourth number one album and their beloved football team Leicester City winning the Champions League, on the outside it seemed like Kasabian were on a high back in 2014. For guitarist Serge Pizzorno, it was the best year of his life; for singer Tom Meighan, it was the worst. Lorne Gillies caught up with Tom ahead of the release of the band’s sixth studio album, For Crying Out Loud, to ﬁnd out about the Kasabian rebirth

As the world quickly gets sucked into a vortex of misery, despair and political upheaval, we can be forgiven for needing a release. Catapulting themselves back into the mainstream as maverick saviours of rock, Kasabian released their sixth studio album – a powerhouse of upbeat, pop-rock anthems delving into an area the quartet have thus far avoided – talking about their feelings.

FOR CRYING OUT LOUD

Describing For Crying Out Loud, Tom speaks fondly of the 12-track record that he calls his “baby”. Living in a dark place at the time, taking care of his ﬁ ve-year-old daughter, Mimi, and struggling with depression, the news that Serge had created a Kasabian record left Tom gobsmacked. Sitting on possibly the best Kasabian album to date, the writing process was a breath of fresh air.

“[Serge] just knocked some songs out on the guitar the old school way, the proper way of doing it,” Tom explains. “I’m an old romantic so that’s my way of writing music. I just couldn’t believe we had a record that quick.” Fans are set to see a whole new side of Kasabian, who are stepping away from their traditional electro-rock-infused anthems.

Tom says: “It’s more human; it’s an album full of great pop-rock songs, which I think we’ve never touched upon before and it’s a little window into our world. On a personal level, it’s also very human; it’s like a biography.”

WHERE DID ALL THE LOVE GO?

Opening up about their feelings and showing a more united front than ever before, it’s no wonder Kasabian have been poster boys for the indie generation since 1997. Having released their self-titled debut album in 2004, there is a bond that can’t be broken.

Revealing his bad times are now, thankfully, behind him, the release of For Crying Out Loud is set to be a new era for Kasabian. He says: “I think we are reborn, and I think it’s a good time to put a new rock album out. Me and Serge were saying, we don’t think bands are given a chance for mainstream success either.” And worrying about mainstream success is not something Kasabian need to worry about.

Negativity has been boxed away, resulting in the release of the most upbeat Kasabian album so far. What is Tom most eager for fans to hear? Bless This Acid House – the track that encompasses the new Kasabian sound in a well-blended cocktail of subtle nods to 90s punk, with hints of classic Ramones undertones paired with lyrics that fans are guaranteed to relate to.

Tom enthuses: “My favourite bit in the song is ‘got no reason to lie/got no reason to try’ – that’s very emotional to me. We’ve got time on our hands to sort things out, I think it’s wonderful.” And having a record that is upbeat and relatable for fans was important to Tom. “We needed this record really,” he explains. “It’s done now, I’m glad it’s done and I’m happy with myself, and I’m back to me.”

Getting their personal lives back together as well as the band – which also includes bassist Chris Edwards and drummer Ian Matthews – For Crying Out Loud is a true return to form for the four-piece. Immortalising their faithful guitar technician, Rick Graham, on the cover of the album in a 70s vibe similar to a King Crimson, Tom says: “I love the fact that it says volume six on it.” And he believes this album is sure to knock Ed Sheeran oﬀ the top spot and bring a little bit of much-needed danger back into the music charts.

From the Top 40 to the stage, Kasabian already have a packed summer ahead of them, including headlining the inaugural TRNSMT festival at Glasgow Green. Set to smash the Saturday (8 July) slot out the park, Tom excitedly explains that fans are in for a musical experience: “It’s an honour to be doing [TRNSMT]. We like Scotland, and I like Glasgow, so it’s great. You guys have got a reputation, I’ve seen it a billion times – they’re crazy, very loud, and very energetic and they have a lot of fun.” Re-wiring from previous live performances, Tom described the new songs as easier to play, with Kasabian guaranteed to do what they do best – perform live.

And the band are deﬁ nitely here to stay.  “As long as we’re making good music, and we make it fun, and we’re happy with each other, it should be all right. Once we lose that, then it’s gone. I never want to be a dragon. I never want to turn it into a job because it’s not our job – it’s our lives. If we start getting sick of it and it becomes a chore? It’s over, my love.”

Climbing back from mental darkness, For Crying Out Loud has not only saved lead singer Tom, but it’s set to rocket Kasabian to even brighter lights. After 20 years of touring, making music, partying, getting married and having babies, suburbia has not taken the edge oﬀ . Rather, it has mixed every emotion together to produce formidable tracks that dare you not to sing back at the top of your lungs – Kasabian are still on ﬁre.

For Crying Out Loud is available on iTunes and Spotify. Kasabian will be headlining TRNSMT festival on Saturday 8 July (www.trnsmtfest.com)