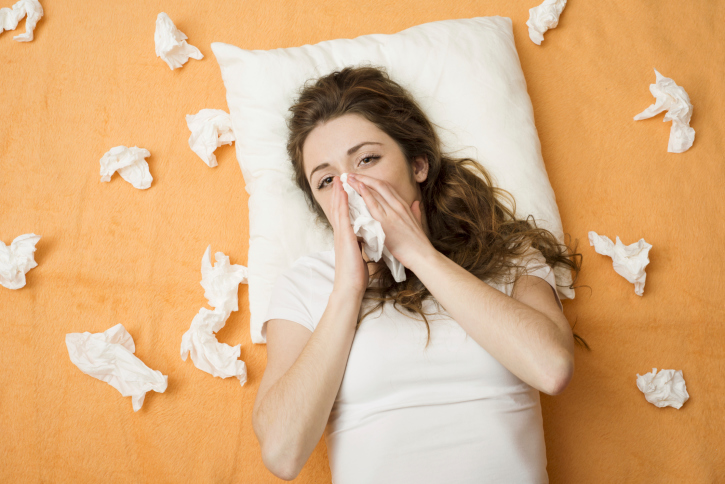 Let’s be honest – there’s nothing worse than being sick, and at this time of year, illness is rife.

While sometimes we’d all we’re all welcome a sick day with open arms – usually when there’s a double maths lesson involved – but overall? It sucks.

One of the worst things about being a student – whether you’re at school, college or uni – is that classrooms and lectures halls are practically a Petri dish of weird, wonderful and disgusting illnesses just waiting to be passed on. Sometimes, sharing isn’t always the best option. From freshers’ flu to glandular fever, we take a look at some of the bugs you’re likely to pick up in class – and how to get over them so you’re fighting fit for that class on quadratic equations…

Let’s be clear – freshers’ flu isn’t really a thing as such. It’s just a phrase that gets thrown about at the beginning of the academic year when everyone’s coughing and spluttering all over each other, usually in first year at college or uni. When you start mixing and mingling with new people, new bugs make an appearance – and for those living in halls without Mum running around with mugs of hot Ribena and all the cough remedies you need, freshers’ flu seems like The Worst Illness Ever. In reality, it’s probably a cold.

The cure: As colds are viral infections, there’s absolutely hee haw you can do. Rest, painkillers like paracetamol or ibuprofen and plenty of fluids will do the trick. If you’re still feeling lousy after a couple of weeks, see your doctor.

Also known as the kissing disease! Glandular fever is passed around via the medium of saliva, so kissing is a danger – your mum wasn’t lying when she said snogging would only get you into trouble. The GF virus stays in your system for a couple of years after you actually have it, so even if you’re feeling all right, you can still pass it onto other people. Rank. The fever itself can lie dormant in your body for six weeks after you actually catch it, and when it flares up, you’ll know about it – sore throat, swollen glands, fever and lots of other flu-like symptoms take hold, usually lasting two weeks, and fatigue can last for months afterwards.

The cure: Again, as it’s a viral infection, this one’s all about rest and plenty of fluids. If you think you have GF, go see your doctor for a blood test to get it confirmed and be prepared to take it easy – let your school, college or uni know you’re going to need some serious time off.

There’s two different forms of meningitis – viral and bacterial. Bacterial meningitis is pretty serious, and can develop really quickly. It can cause inflammation to your brain lining – and needs treatment fast. Children and young people are most at risk of catching meningitis, so always be on the lookout for symptoms, which can include a stiff neck, severe headache, high temperature, sensitivity to bright lights, vomiting and a rash which doesn’t fade when pressed. If you see any of this, get to your doctor ASAP.

The cure: People who catch viral meningitis usually recover without treatment, but bacterial meningitis needs medical treatment quickly, usually in the form of antibiotics. If you think you have either strain, make an appointment to see your GP or ring NHS 24 on 111.

It sounds quite cute and friendly, but mumps is anything but. Mumps involves swelling of the glands around your face – and it flipping hurts. Also look out for painful joints, headaches and a high temperature. Like colds and flu, it’s passed on through coughs and sneezes – and if you didn’t get your MMR jab as a kid, you’ll be more at risk of catching it. If you’re unsure if you’ve had it, plus your booster at primary school, contact your doctor to see if you can get it now.

The cure: No cure for this one, so as with all viral infections, it’s all about bed rest and pain killers. This one is super contagious, so keep away from your pals for at least five days.

If you’re not feeling well and don’t know what’s wrong, always speak to your GP first, or if you can’t get to your GP, call NHS 24 on 111. It’s better to be safe than sorry.