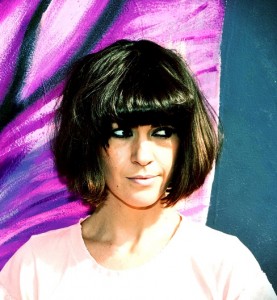 The spring issue of Source is hitting schools, colleges and universities this week – squeal! Alongside all the best careers advice and biggest interviews, we’ve got queen of the unusual documentary-turned-author Dawn O’Porter as this issue’s celebrity graduate. As well as sharing details of the academic experience that kick-started her career, Dawn told us a little bit about her new book, Goose, which is out on 3 April. So how do you go from making documentaries about losing loads of weight to being an award-nominated writer of fiction? We found out…

You’re very busy just now – you’ve got the fashion line, books, TV work. How do you manage to balance it all?

I manage? [laughs] I don’t know really. I took on an assistant, which has changed my life, that’s number one. I make sure that writing is my nine to five job and everything fits in around that. I think as long as you’re doing the things that you really love and enjoy, you’ll find the time. There’s a really good phrase – you’ve got as many hours in the day as Beyoncé. It’s important to remind myself of that.

As you’ve told us in the spring issue of Source, you studied acting at the Liverpool Institute for Performing Arts. What did you see yourself doing after you graduated?

TV producing and writing. I wanted to go down to London to produce TV shows and then get into writing. I did that for a bit and then slipped in front of the camera accidentally at one point.

How did that happen?

I’d worked behind the camera for some time, and I knew people. There was a company that said they wanted to make a documentary about a girl getting really fat, as a kind of ‘up yours’ to the fashion industry. I was doing it, and then I thought, ‘This is wrong. The hook would be to do a documentary on getting really thin and show how dangerous that is.’ I saw one of the commissioners from the channel at a party, and I’d had a few glasses of wine – as it usually goes – and I said, ‘I think we’re getting this all wrong, I should get really thin.’ And the whole show changed. But then they decided they didn’t want to do it anymore. I was like, ‘I’ve now got no work.’ Luckily, I’d met an agent at a party the week before, totally randomly. I signed up with him and he got this memo from the BBC saying they wanted someone to starve to a size zero, and I said, ‘I’m ready to go.’ We had a meeting with the execs at the BBC, and it was a no-brainer from the moment I walked in the room that I was just going to do it. It all started from there really. 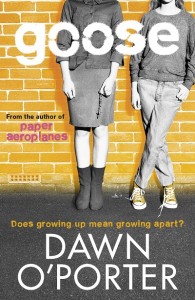 You’re an author now – is writing something that you always wanted to do?

Yes. Writing was always number one. I remember sending off a comment to a magazine once and they published it. I still remember the feeling of, ‘I’m a published writer.’ That’s the best thing that’s ever happened to me. Right from the start, moving to London and working in TV, I was writing. I wrote my first novel when I was about 23 but I would never show it to anyone! I did really well in non-fiction, I wrote a book when I was 25 and I wrote lots of journalism but fiction was always the dream. I would never have had the confidence if I hadn’t got a call from a publisher saying, ‘Do you want to write fiction for us?’ Then I had to come up with the idea, pitch the idea and they took it. I always thought that one day, when I’d retired, I’d write a novel. I’m so lucky to do it now.

Your second novel Goose is out in April. What’s it about?

It’s the sequel to Paper Aeroplanes, so it’s Renée and Flo a year and a half later. It’s about them trying to hold onto their friendship, realising how different they are and working out whether they can carry on or not. It’s very different from Paper Aeroplanes. There’s the same issues, but I didn’t go over the same old thing. They’re older, wiser and making bigger mistakes I think. I had major second album syndrome – it was really frightening writing a sequel, but I actually really like it.

How much has your own life influenced your writing?

Loads. In Paper Aeroplanes, the character of Renée is so obviously based on me. But it was really nice being able to start with me but moving into fiction. The story isn’t real, the characters aren’t real, but I could write very cathartically about my childhood through the character of Renée, which I think I needed to do. In Goose, there are similarities to the school I went to, she drives the same car I did, but her life isn’t my life any more. I feel like I’ve really got out my need to talk about my childhood in Paper Aeroplanes, and now I’m writing fiction, which is really lovely.

What’s your advice for budding writers?

Write. People say, ‘I want to be a writer, I want to be a journalist,’ and I’ll ask them to send me something they’ve written and they’ll say, ‘Oh, I haven’t written anything.’  When I started out, there was no such thing as blogging and I just think, ‘Imagine if I’d been able to publish my work!’ I was literally sending handwritten letters to editors. It was prehistoric! You can tweet the editor of a magazine. It’s instant. So do it!

Dawn’s second novel Goose is out 3 April on Hot Key Books. She’ll be signing copies of the book in Waterstone’s, Edinburgh, on 29 March, and  – head to www.dawnoporter.co.uk for more details.