It may sound weird, but I’m not afraid to admit it: my hair is my pride and joy. Last week, my hair measured 33 inches from root to tip. It’s straight, in great condition and golden in colour. Growing it became a bit of an obsession in its latter months – the longer it got, the more people would compliment me, telling me how great it looked and how shiny and conditioned it felt.

Late last year though, I read an article in a magazine about a woman who had donated her hair to the Little Princess Trust and it changed the way I thought of my hair completely. The charity (let’s call them LPT for short) makes real human hair wigs and hairpieces for children who have lost their own to cancer and other illnesses. On the LPT website, I read that in many cases, children would rather avoid potentially life saving treatments then go through the trauma of hair loss. Suddenly, the love I had for my own hair seemed completely superficial and vain.

After further research, I learned how much better real human hair wigs are than synthetic ones. Although real hair wigs don’t last as long (usually between 4 and 5 months), they look so much more natural, feel nicer and are more comfortable to wear. It was such an obvious decision for me after that – I was going to say goodbye to my luscious locks and donate my hair to someone who needed it a lot more than I did.

From December to March, I fundraised like mad. I’m lucky in that I work for a large company with lots of lovely people who were more than happy to donate their pennies to such a great cause. Most people were shocked that I’d even decided to part with my long hair, knowing how much I obsessed over it. Within a month, I’d surpassed my target of £300 and was heading steadily towards the £500 milestone. With a huge social media campaign, I’m 100% sure that I irritated all of my friends with my constant posts about the fundraising I was doing!

On the 7 March, I headed to the salon to meet with my hairdresser, who had already been prepped on what was about to happen! With my best friend filming the moment of truth, I said goodbye to over twelve inches of my hair as it was chopped off in a ridiculously long ponytail. As I had my hair cut and styled, I wasn’t looking at the pony tail in horror or worrying what my hair was going to look like now that I had so much less of the stuff – I was just relieved that I’d done it and that it was going to a better place.

Putting my ponytail in an envelope and then into a post box is maybe one of the weirdest things I’ve ever done but it felt great. Knowing that I was helping to make a wig for a very ill little person was an amazing feeling. Although it’s unlikely I’ll ever see the finished product, it’s nice to know that my new short hair has resulted in someone else’s life becoming a tiny bit less traumatic. 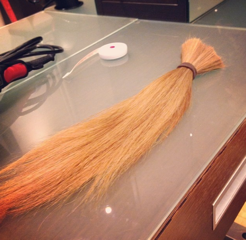 If you have any more than 7 inches of hair that you could donate to the Little Princess Trust, I cannot recommend donating it enough. As well as a new look for you, you could be making a very ill child’s life so much better. The cost of a human hair wig to the charity is usually around £350, so why not fundraise before the big chop and cover the cost? It doesn’t matter if your hair is curly, wavy, straight, dyed or coloured – the charity will still accept your generous donation. The only reasons the Little Princess Trust would not be able to accept hair is if it is under 7 inches long, grey, chemically straightened or afro hair.

I’m loving my new short hair, and if anything, my family and friends compliment it more, knowing how much of a drastic change it is for me! If you would like to visit my fundraising page to see how I went about raising money, you can at www.justgiving.com/CaitsCuttingHerHair. My advice to anyone considering donating their hair would be to try and raise lots of money, keep your hair in great condition on the run up to having it chopped and be brave!

Find out more about the Little Princess Trust and how you can get involved with their amazing work at www.littleprincesses.org.uk

Cait is in the final year of her journalism degree at Caledonian University in Glasgow, as well as Source's resident beauty expert! Check out Cait's blog for tips on looking glam on a student budget.