Last Thursday (23 May) everyone and their good bois headed to the polling stations to take part in the European Elections.

We weren’t originally supposed to be voting in the European Elections, given we were meant to leave the European Union (EU) in March.

However after an extension, we’re now due to leave on 31 October. This means elections had to be held, to ensure we’re represented in the European Parliament for the remainder of our time in the EU – however long that may be.

The UK, turning up to the EU’s Halloween party, as France’s plus one

While we voted on Thursday, along with The Netherlands, the rest of the EU turned out to vote on Friday, Saturday and Sunday, meaning the results started to roll in late on Sunday night.

In a nutshell, in Scotland, The Scottish National Party (SNP) won in 30 constituencies, with almost 600,000 votes – 37.7 per cent of the vote. This means they will send three Members of European Parliament (MEPs) to the EU.

The Lib Dems won in Orkney and Shetland, meaning they will send one MEP to the EU, along with the Conservative Party and Brexit Party, who also get one MEP each.

In England and Wales, it was a very different story, with the Brexit Party winning 29 seats and 31.6 per cent of the vote. 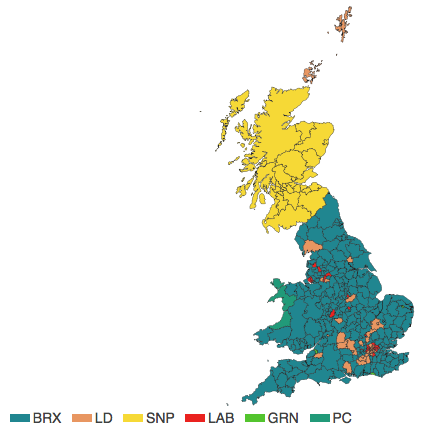 Credit to the BBC

Political commentators believe the contrast in votes between Scotland, England and Wales highlights the difference in public opinions regarding whether to remain in or leave the EU. It is possible that the SNP could use the election as a catalyst for another Independence Referendum.

While The SNP and Brexit Party celebrated, it was a truly disastrous night for the Tories and Labour, both of whom lost 14.8 per cent and 11.3 per cent of their votes respectively.

Recent handling of Brexit, with the Tories’ inability to move anything forward, and Labour’s refusal to take a direct stance on whether the party wants to leave or remain, affected both parties greatly, in a hugely negative way.

So, there we have it: the European Elections are over for another five years.

Will we still be in the EU to vote in the next elections? At this point, who truly knows.

Are you following Source on Twitter and Instagram? Make sure you do for all the latest news.