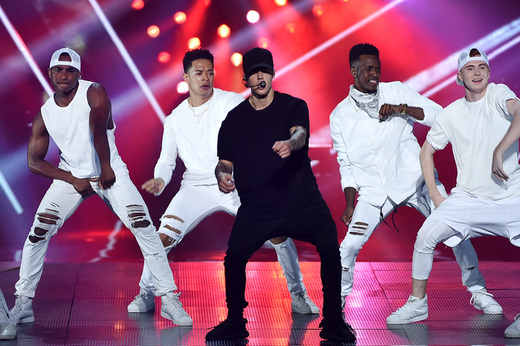 Have your eyes recovered from the visual assault that was Miley Cyrus’s wardrobe at the MTV Video Music Awards? Us neither. Despite her, the night was jam packed with great music and inspiring characters in the industry so here are five top tunes for your Friday!

Skrillex and Diplo – Where are Ü now with Justin Bieber

He’s still Celeb Land’s brattiest youth, but if he’s willing to go on a comedy roast, be ripped to shreds and apologise for his general existence, we’ll give him the benefit of the doubt. With a little help from Skrillex and Diplo who have teamed together to form trap duo Jack Ü, he performed this outrageously good tune which is still as catchy as when it came out in April. A certified party starter for your Friday night.

Tori Kelly – Should Have Been Us

Tori absolutely blew the roof off the place when she belted out Should Have Been Us at the VMAs. Decked out in an incredible structured bronze-gold cat suit, guitar in hand, she was Sheryl Crowe meets Shakira, thrashing her golden mane all over the place and sliding on her knees like a true rock goddess. Congratulations Tori, you nailed it.

Demi Lovato – Cool for the Summer

There was more head thrashing from Demi Lovato as she performed outdoors amongst a beach themed set although thigh high boots and a sequined cozzie are wildly inappropriate for the beach. Her voice was not on point, but we were too distracted by her crowd-surfing on a lilo and punching giant cherries which exploded into confetti. The tune is catchy… for now.

He didn’t actually perform on the night, but seeing as he’s running for president… it seems like a good time to dig up a classic Kanye tune. Stronger came out in 2007, went straight to number one and turned platinum. You can say what you want about Kanye, but his talents as a musician are outstanding. And he promises free pairs of Yeezys to everyone when he gets into the White House so…

How many tropical birds died in the making of that headdress? Tropical tribal dancers galore, Nicki starts off on a throne made of men (obviously) then mingles down with her feathery minions, twerking like there’s no tomorrow and proceeding to smack her crotch. That aside, this is a big bassy belter of a tune for your Friday – turn it up!