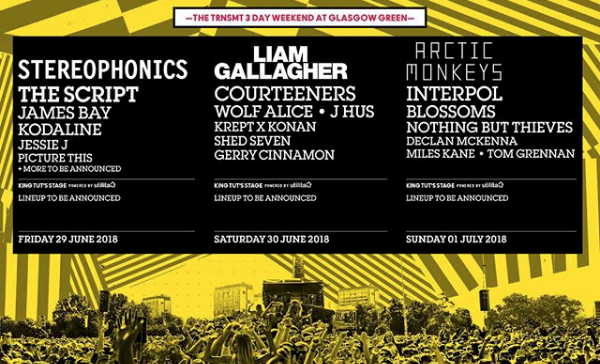 I bet you look good on the TRNSMT stage.

Do you wanna know who has been announced as the next headliner? Are you buzzin’ to see this band when the sun goes down? Best be sure not to act like a mardy bum if you miss out on tickets.

If you haven’t picked up on all the song titles yet, we’ll put you out your misery – the Arctic Monkeys are back.

We’re pleased to announce our 2018 festival dates. Details via link in bio.

Set to close the festival’s first weekend, the Arctic Monkeys will perform on Sunday 1 July. This comes after months of online gossip and underground whispers that the popular indie band were set for a return.

What a revival this is going to be. The Sheffield quartet have not released new music since 2013 and it’s been four long years since the Arctic Monkeys performed in Scotland.

TRNSMT is certainly pulling in the big names for this year, other acts announced to perform beside Arctic Monkeys including: Interpol, Declan McKenna, Miles Kane, and Nothing But Thieves.

Now in it’s second year, TRNSMT will be returning to Glasgow Green over two weekends with several stages packed with the hottest acts on the planet. That’s a lot of music for your buck. And there’s still one more headliner to be announced before the line-up is complete. Stay tuned!