Channel 4 youth drama Hollyoaks is set to tackle the issues of bullying and cyber bullying in a new storyline and online tie-in.

We’ve all seen character Esther Bloom suffer at the hands of her group of mates – particularly Queen Bee Maddie – but things are going to step up a gear as Esther’s bullying nightmare gets worse. The ‘banter’ she receives daily gets too much for the teen, who gets to the point where she doesn’t want to go to college.

Dylan decides to launch his own social networking site DocYou as part of a competition, but the sixth formers start to use it for all the wrong reasons, uploading humiliating content about Esther. The comments she’d get at school and in the street become constant, and poor Esther struggles to cope.

But DocYou isn’t just a TV creation – the site will be going live for users to see how the Hollyoaks teens interact. Renowned for its ability to confront difficult youth issues, the award-winning Hollyoaks writing team have created a range of compelling and exclusive content, building on the in-show storylines and released in the form of videos, photos and text posts, highlighting major challenges faced by British teenagers including cyber bullying, relationships, privacy and the dangers and pitfalls of revealing too much online. 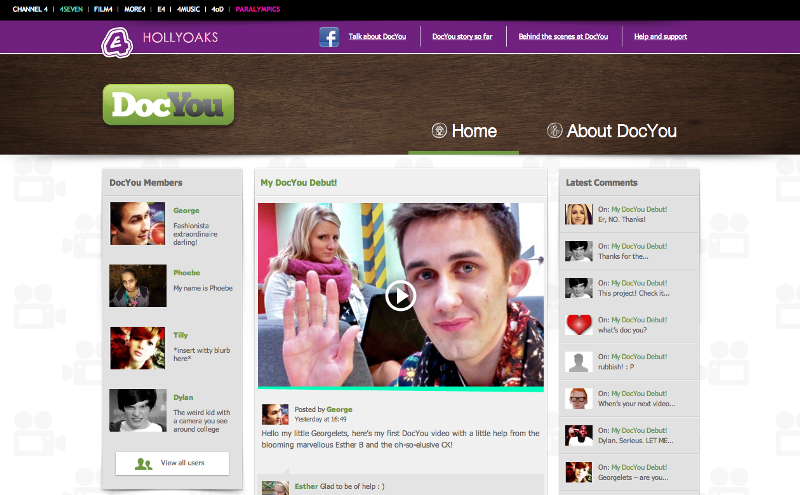 Created by Lime Pictures’ digital team and commissioned by Channel 4 Education, the project is supported by Beatbullying and will explore the impact of social media on everyday life, and what happens when somebody is constantly picked on in small ways.  This ground-breaking initiative will add a whole new level of depth to the story and highlight how easy it is to miss what is really happening on a site full of seemingly benign content and how this content can become an additional source of bullying for some people.

Hollyoaks will also work with Beatbullying offline in a series of events and initiatives that will see some of the Hollyoaks cast train and shadow as cyber mentors to raise awareness of the issues of bullying and the fantastic work Beatbullying engages in with young people.  As a further commitment to tackling the issue, Channel 4 Education have funded Beatbullying Cyber mentor training schemes in four schools across the country to coincide with National Anti-Bullying week in November.