Sky diving on a dare from Dappy, cosying up to Cheryl Cole and bantering with Bieber – it’s all just a part of the job for In:Demand’s Romeo! The radio host sat down to talk work with Source…

You’ve pretty much got the best job in Scotland. How did you get started?

I started out at Radio Clyde doing work experience at 16. I never wanted to be on the radio then, I wanted to be involved in media marketing. I went to uni for two years, then started doing more on-air stuff at Clyde, and I got a flavour for it. I just worked my way up the ladder to where I am now. There is a lot of hard graft and standing out in the freezing cold handing out leaflets – but it’s worth it!

You’ve met every celeb out there. Who’s your favourite?

Calvin Harris. His chat is first class. Despite his global success, he remembers people as well. It’s not like you expect anyone to remember you but it’s quite nice when people, despite how big they are and busy they are, still remember the first time you met. I like One Direction as well, and The Wanted boys – they’re always up for a bit of nonsense! You can’t do anything serious with them.

What’s been the highlight of your career?

Walking on stage with U2 when they played a gig in Sheffield. Bono was about five, ten feet in front of me. That’s pretty much the career highlight!

What’s been the most unusual thing you’ve had to do?

I was challenged by Dappy from N-Dubz to do a skydive. So I jumped out of a plane at 10,000 feet wearing a Dappy hat and a thong. I had my jumpsuit on though – I wasn’t naked. I also had to swim with sharks, Calvin Harris dared me to do that. And I’ve survived it all!

Where do you hope you end up?

I’d love to do TV and I’d like to work in radio in a different part of the world, try a different market completely – like America or Australia.

Any advice for budding radio presenters?

Put a demo together – that’s basically a CD that you send to a programme director of a radio station. On it, don’t try to be a radio presenter, because you’ll just sound like Alan Partridge. There are other tips, but I won’t share them – I don’t want to give my job away! 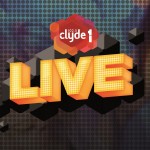 We’ve got two pairs of tickets to give away to the biggest pop event of the year! You and a pal could be seeing Calvin Harris, Leona Lewis, Labrinth and more at the SECC on 14 December with Clyde 1 Live! To get your paws on some tickets, head to our competition page to enter, or you can buy your own at www.ticketsoup.com.