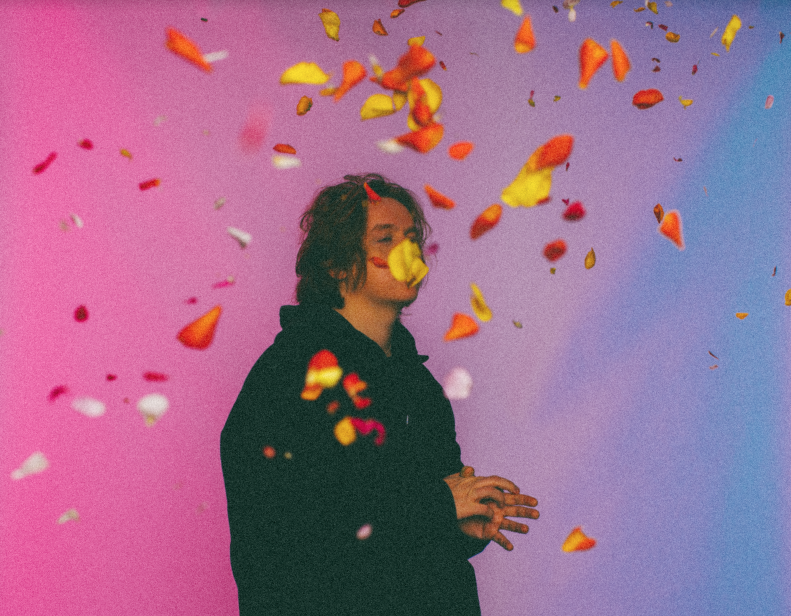 It has been weird to watch how much it’s grown,” laughs Lewis Capaldi, McCain’s Potato Smiles mascot. “Everything that happens feels like a surprise. It’s bewilderment almost; it has been nice to watch.”

No less than two years ago, Lewis was performing in pubs and clubs across Glasgow – hiding in toilets before his set, in fear of getting “chucked out” for being underage.

Now, having spent seven weeks at number one with Someone You Love, passing Ariana Grande’s number one reign (thank u, next), Lewis is making it big.

And he’s only released his debut album in the middle of May.

Divinely Uninspired to A Hellish Extent is the much-anticipated debut album from Lewis (released tomorrow, 17 May).

Having already blown us away with his sheer wit, comedic timing, questionable toilet habits, and eclectic array of sunglasses – not to mention a voice that would make a gospel choir envious, infectious, emotive tunes, and a talent that has been evidently missing in the charts – Lewis is surely here to stay.

But, for all the success, why does he feel so uninspired? “The album name comes from a song lyric that actually didn’t make it to the album,” explains Lewis. “It’s about my disillusions towards the music industry side of things.

“One day you’re the best thing since sliced bread and then your song isn’t doing as well as it should be: I was starting to take things too seriously and getting bogged down with it all.

“I wrote this song about myself as a reminder that this is meant to be fun! I need to realise that this is fun, so I wrote a song about it. Then, I thought: what better way to poke fun at it almost with an album title that is so ridiculous it would be interesting to watch the label market it with such a negative title,” laughs Lewis cheekily.

Underneath the charm, Lewis is a young lad from Whitburn whose talent is taking him to the heights he deserves to be at. With mere weeks before the release of his album during our chat, Lewis is excited to release it.

“Hopefully it sells well so that I can keep doing this,” he continues. “It’s not the best album in the world, but it’s a good album. I like it a lot – it’s my favourite album I’ve ever made. There are some people that are going to be disappointed, but that’s just the way it is. It is a very strong debut album and I hope people like it.

“It’s a wee bit like Christmas, but I’ll probably be able to sleep the night before the album comes out,” Lewis adds.

Alongside the prospect of a chart-topping album, Lewis is preparing for a summer, winter and 2020 packed wall to wall with live performances.

Thrilled to soon be able to perform a set that everyone will know the words to, it’s preparing for his biggest headline show to date that fans can expect first.

“Here’s this idiot putting the show on, thinking absolutely no way this is going to sell out,” remembers Lewis about the announcement he was to headline Edinburgh’s Summer Sessions.

With acts such as Courteeners, Florence and CHVRCHES taking the stage, Lewis is the big seller.

“In the space of my flight taxying and starting to take off to when my phone lost signal the tickets had sold out. It puts the pressure on the gig a wee bit because I’ll need to do well,” he continues.

“I’ve never done shows as big as the ones I’m going to be doing. There’s nothing like getting thrown in at the deep end. I couldn’t be more excited.”

Selling out in minutes, it wasn’t long before Lewis announced a second night in Edinburgh – which again sold out in minutes. See a pattern here? Well, next up Lewis sold out his entire headline UK tour before – deep breath – selling out not one, but two, nights at Glasgow’s Hydro in 2020. And a little place called Wembley Arena.

Sticking with Summer Sessions, Lewis has got a lot in store for us.

“I have previously performed with topless male dancers and had fireworks, so maybe we can mix in some of that,” says Lewis with a hint of excitement in his voice. “I do want to try and do some special stuff, maybe try and get some guests on – that would be quite good.”

And there is one collaboration we’re all waiting on: Lewis Capaldi and Little Mix.

“Getting Little Mix on the stage would be an absolute dream,” he laughs. “They’ve always got those matching outfits, I would squeeze into one of them and do a dance number. I’m a huge fan of Little Mix and if they would like to do anything, I’m up for it.”

Who knows, with Little Mix’s Jade tweeting Lewis about working together, this is one dream that might just get ticked off the bucket list.

Ahead of his performance at Summer Sessions, the hype at the moment is around our local lad selling out the Hydro all before his debut album had been released. So, as a performer, how does that feel?

“It is so mental to talk about doing bigger dates, because I was buzzing back when we did King Tuts,” emphasises Lewis. “It’ll be cool to come back and do something with the Hydro.”

Until we hit 2020, we’ve got a debut album, two Summer Session dates and one headline tour to look forward to. Question is: did you get your tickets?

Stream Divinely Uninspired to A Hellish Extent on Spotify from midnight tonight!