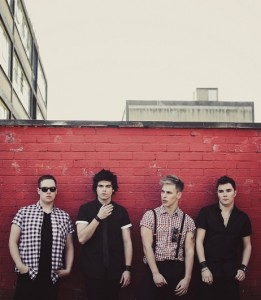 They’ve been together for a year, with new boy Nicky only taking position behind the drums in February, but this April the EofE lads are embarking on an adventure they still can’t quite believe – supporting McBusted on their epic UK arena tour.

EofE are vocalist Tom Harris (17), guitarist Dan Bremner (19), Luke Bradley (18) on bass and 25-year-old Nicky Waters on drums. Formed in 2013 from the Black Country, the lads serve up crossover rock perfection, akin to You Me at Six and Thirty Seconds to Mars. Their catchy riffs and soaring, singalong choruses caught the attention of McBusted earlier this year, winning them a spot on the 33-date supergroup tour.

How did you guys get together?

Tom: Me, Dan and Luke have been playing together for about two and a half years. I met Dan through an ex-girlfriend, and I was in a band at the time. He came to watch me perform and he asked me if I wanted to jam with his band at the time. There’s been various line up changes since then, and Luke joined on bass. Then in February we auditioned Nicky when our last drummer left. So he came in and we’ve finally got a line up that we’re all happy with and can see it going further. This is the one that’s going to stay. Hopefully!

Where did the name EofE come from?

Dan: The name comes from East of Eden, the James Dean film. We all liked the film, and it was a cool name. We found that, because of the film, if you typed it into Google or YouTube, there’s the film and then there’s another band from the 1970s that we didn’t know about – we were unfindable. So we shortened it to EofE.

How would you describe your sound?

Nicky: We get referred to a lot as crossover rock. We’ve got the rock edge, and catchy singalong choruses as well. McBusted – they chose us – are a perfect band for us to play with. They wouldn’t have chosen us if we were screamo!

Tom: It would be interesting though!

How did you feel when you landed a support slot on a 33-date tour?

Luke: It was really surreal.

Dan: Our manager pulled into a Sainsbury’s car park and said, ‘I’m just going to pop in and get something.’ When he came back out, he filmed our reaction – he’d got the email before us. There was a lot of shouting! Took us about two hours to calm down. It was very weird.

What dates are you looking forward to most?

Nicky: For you guys, it’s Birmingham.

Tom: Us three are looking forward to being on our home turf. Our fans at home, who’ve seen us before when we first started, will get to see us on a big stage which is quite fulfilling for us. Nicky’s from up north, in Newcastle.

Nicky: The Newcastle Metro Arena is the big gig. That’s special to me.

Nicky: All of them really!

How did the tour slot come about?

Luke: If we told you, we’d have to kill you.

Tom: Our manager sent some previews of our tracks off to their people and they offered us it. We were like, ‘Eh… Yeah!’

What can fans expect from a live set?

Tom: A lot of energy. It’ll be something fresh.

Nicky: We want to go out there and be as powerful and as enthusiastic as possible. Have a good time.

McBusted are the ultimate supergroup. Who would you form a supergroup with, if you could pick any band?

Luke: Thirty seconds of the E chord. They’re quite similar bands as well, so it’d gel. Bit like McFly and Busted. 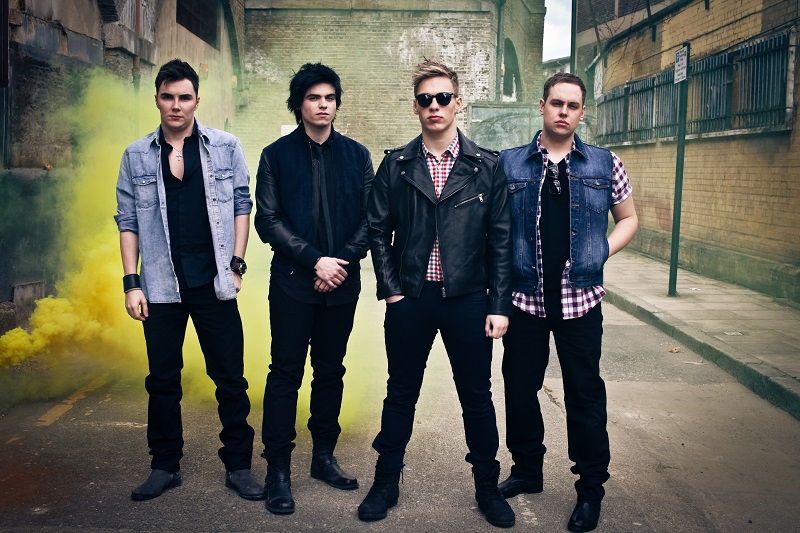 Have you been working on an album?

Dan: We’ve got six tracks recorded with Gavin Monaghan at Magic Garden Studios, then we’re doing the tour before we’re back into the studio to record three more songs I think it is.

Tom: We haven’t decided if we’re going for an album or an EP yet. It depends of the tour. If there’s a demand for it, we’ll be it out. But we’re not going to do an album if it’s not going to be Top 40.

Luke: It won’t be released until early next year.

What inspires your songwriting?

Luke: It’s real life situations though, we all bring something, Tom might bring some lyrics, Dan might bring a guitar riff, then we’ll all sit down and work it out. We all have input.

What are your hopes for the band? Where do you see yourselves in five years’ time?

Nicky: For when I spontaneously combust.

Luke: It’s like Spinal Tap, we seem to get through drummers.

Nicky: No, we want to keep pushing, writing music.

If you weren’t making music for a living, what do you think you’d be doing?

Tom: I’d probably try my luck on Coronation Street. I got a BTec in college for drama. I’d use that.

Nicky: I teach drums, so if I wasn’t doing music, I don’t know what I’d do.

Luke: I’d be doing what you’re doing, journalism I think – probably in radio.