It was a dark, dark day back on 14 January 2005 when pop-punk heroes Busted announced their break up. Well, almost a decade later we’re totally keeping it cool (NOT) ahead of Busted’s live return to Glasgow tomorrow (23 March). 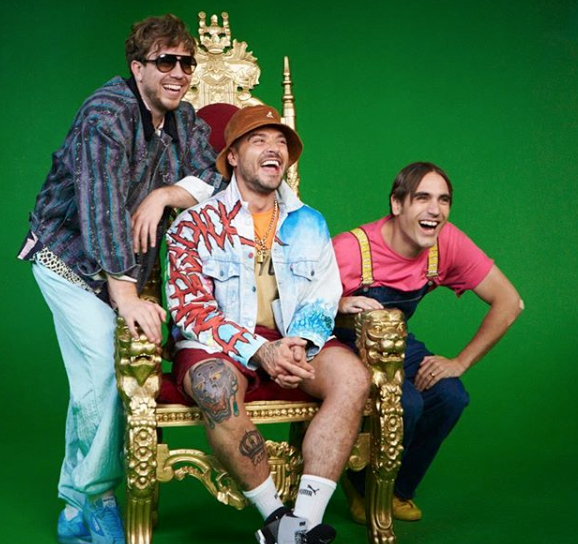 To celebrate this momentous occasion, we caught up with Charlie Simpson of Busted fame to discuss new music, performing live and learn what the band really went to school for.

First off, how did the conversation start to get Busted back together?

It was such a natural process. We hadn’t seen each other in quite a long time as I had been off doing my solo stuff [with Fightstar]. In 2014 we started hanging out again and it naturally became a catch up. James [Bourne] messaged me to ask if we could go to a studio to do some writing sessions – not with any record in mind, just to have some fun.

We went to Philadelphia in the summer of 2015 and started writing and getting back in the studio. It was that point where we started having a clear vision of what we might do if we got back together. That was the catalyst.

You had such a successful career with Fightstar, being solo, then Matt (Willis) and James as part of McBusted – how has this benefited you all as a band?

This time round it feels so different, because we’re much older. Originally, I left because I felt we didn’t have the control we wanted because we were signed to a major label. It was a great, fun experience, but, this time round we’re completely in control of what we do. Every decision made comes from us.

Do you think you guys are appreciating it more second time round?

Definitely! Also, it was an absolute whirlwind first time around. I had just come out of school and gone into the band. It was weird – I finished my GCSE’s to running around the world playing these massive shows. I didn’t really get to take it in. Now, having been very fortunate with ten years of doing my own stuff, coming back to it makes you see it in a completely different light.

All of the fans have stuck with us through all of our own things up until now, so it’s definitely more appreciative and humbling.

You played an intimate gig a few months ago to just 100 fans. What was that like for you?

We did three back to back shows at the 100 club and it sold out in 30 seconds! There were stage invasions, it was a full-blown party. Everyone in that room were hard core fans. It was great to see the fans that have stuck with us for over 15 years.

I saw the pictures, it looked crazy!

It was certainly crazy.

Tour next month… who’s coming!? Shall we do another stage invasion?? 🤘 #HalfWayThere 📷 @tompullenphoto

So, on a different scale, how are you preparing for the arena tours?

Playing large shows is a different experience than performing smaller shows. We’re already having discussions on the production, even just to do a lot more with the show because we have more space – we are so excited about putting on a big, theatrical show.

Plus, the Glasgow crowd is always incredible.

That was my next questions! Are you looking forward to coming back to Glasgow?

It is so funny, I’ve played from King Tuts all the way to the Hydro, and so many venues in between, and I’ve loved every single one. Whether it’s a tiny, intimate acoustic show or playing the Hydro: I can guarantee every Glasgow show will be one of the best on the tour.

The music culture in Scotland is so rich and strong. A lot of my favourite bands are from Scotland, so playing there is going to be insane.

And I know the fans are looking forward to hearing new music.

Yeah! There was a shift from old Busted when we were doing the last record [Night Driver], and we didn’t want to come back and do something similar. With Half Way There (released on 1 February 2019) this record is the seminal Busted album. I think this is going to be the album that every Busted fan wanted to hear. It’s definitely my favourite Busted album.

Listening to Nineties, there is a Blink 182, Sum 41 vibe – was that a conscious decision for you guys to go back and touch on your original Busted sound?

What was it like working with Gil Norton (Foo Fighters, Pixies, Jimmy Eat World) on the album?

He is a legend.

Yes, he’s brilliant! He’s made some of my favourite albums…

He has always been a bucket list producer for me, too. James always jokes to me that producers are like collector’s cards. He is the producer that produced the albums that I spent years listening to, and now you get to work with him – it’s amazing. Just being in the studio and talking to him, working with him and drinking in his knowledge. Big up to Gil for making this album what it is.

God I miss the Nineties. Thank you Dubai, ready for tour 🤘🔥

The album that has transpired didn’t actually start until half way through making the second album. We went out to LA and did a bunch of demos, wrote another album, basically, but it just wasn’t gelling. We weren’t feeling it.

When we wrote Nineties, Matt was doing a writing session with Dougie (Poynter) and the riff that comes in wasn’t supposed to be anything. Matt played us the riff and we knew we had to write a song around that riff. Everyone knew this was it!

Then the album came about quickly.

But, the big question, what is the song you want fans to listen to?

There’s a song called Shipwrecked in Atlantis that I think is absolutely brilliant. It really is one of the tracks I love – oh, and also Radio. That is a brilliant song.

The album does tell a story and it heads backs to the old style of Busted. It flows really nicely.

You’re all in different stages of your life now, too. What is it going to be like playing Year 3000 and crashing weddings live?

(Laughs) It’s fun. It’s like watching Blink who are all in the 40s talk about poo – it’s just fun. We’ve reworked a lot of the old songs to bring them in line sonically with the newer tunes, one day, I would like to do a greatest hit and record all the old songs in a modern way.

Yeah, I love the way Mark Hoppus and Tom DeLonge (Blink 192) do it on stage, you can see what their relationship is like off stage. And yourself, James and Matt all have a good bond. So, what three words would you use to describe Busted?