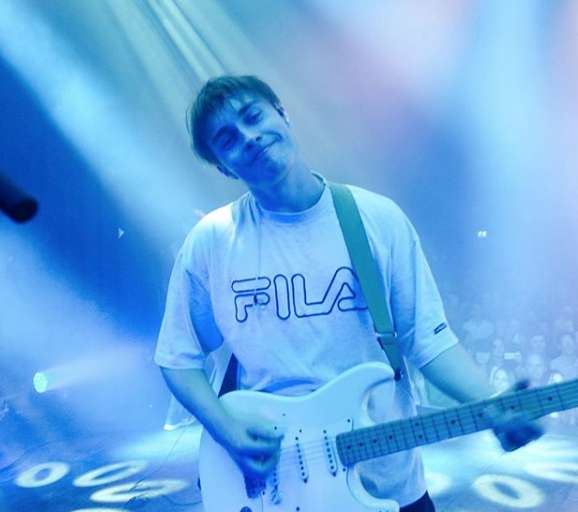 We caught up with Sam Fender ahead of his sold out show at Queen Margaret Union in Glasgow (3 May 2019) to chat about his debut album, and going vegan to save humanity.

Sam Fender has had a rollercoaster ride to get to where he is now, from writing songs in his bedroom as a teen, to receiving the Critics’ Choice Award at the BRITs earlier this year.

Where did the inspiration for your debut album, Hypersonic Missiles, come from?

I suppose it’s about my youth really. The songs have been written over the course of the last five years so it’s genuinely been my youth, and the UK: those are probably my biggest inspirations. It’s also about Newcastle, my home town, and everything that’s been going on, like Brexit.

I’m inspired by a lot of different things, it’s a very mixed debut album. Some of the songs on the album I wrote when I was 19, then some I wrote when I was 24. It’s a good first introduction I suppose as to where I’ve been and where I’m going.

What do you enjoy most about touring?

Just seeing the fans man, that’s the best bit. Going out on stage and seeing a room full of people going wild to the tunes that you wrote in your underpants, on a Tuesday afternoon, watching Cash in the Attic.

Can you tell me a little bit about your kebab merchandise shop?

We just love kebabs, we are Geordies so we figured we would just play on the fact that we are from a place where the culture in our home town is to have a kebab. So, we thought at the end of the gig, have a kebab stall. It doesn’t actually sell kebabs but all the t-shirts are wrapped like kebabs and we sell garlic mayo and sweet chilli sauce. The garlic mayo is peng, you can put it on your kebab after the show.

The fans have spoken! Due to popular demand we now have GARLIC MAYO at our merch kebab shop! 🤤
(Available ya shows only for now) x pic.twitter.com/WFMADuNS4F

Your lyrics cover quite current themes, politics, male suicide, toxic masculinity, Brexit – the list goes on. Why have you decided to cover this in your music?

What would you say to any young people who are maybe a bit disillusioned with politics at the moment?

Apparently it’s the start of the end in 10 years-time if we don’t make some serious, serious changes. There’s an irreversible chemical reaction, that’s what everyone is talking about at the moment, aren’t they. That to me, sounds pretty scary.

I like eating meat but if there’s anything that’s ever made me want to go vegan, is the fact that there’s 10 years left. Nothing that makes you want to go vegan more than a countdown to the end of humanity.

What advice would you give to any young people reading who are considering pursuing a career in music?

It’s all about the tunes, so whatever you do, you have to write a good song. Once you have a few of them, you need to relentlessly believe in it. You need to work very, very hard but also make sure you’re doing it for the right reasons. Do it because you love the songs you write, and write the songs you want to hear on the radio.

Are you following Source on Twitter and Instagram? Make sure you do for all the latest interviews with your favourite celebs.