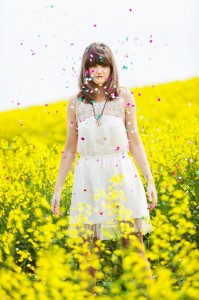 It’s Saturday 2 November, and Katie Sutherland is preparing for her first big performance.

While the singer is no stranger to live shows, having supported stars such as Elton John and Sugababes in venues like Glasgow’s SECC, this could be seen as her big debut. Until this year, Katie had performed under the name Pearl and The Puppets – and now, she’s going it alone.

“I was signed to Universal for a couple of years and I only brought out a little music, then there was a standstill and I wanted a bit of a change,” Katie says of her name change. The singer, from Kirkintilloch in East Dunbartonshire, has now scored a publishing deal with Warner Music but is currently independent from any record labels. Katie said that the decision to go on her own was the easiest she’s ever made, revealing: “It’s quite a relief to own your recordings -you can do what you want with them. When you’re on a label you kind of sign your life away and you have to do what they want.”

Katie first realised she wanted to pursue a career in music when she was at Glasgow University studying to be a teacher. She completed her second year before dropping out to focus on music, much to the annoyance of her mum. “She didn’t like it,” Katie laughs. “I used to play the piano and I had three songs – I used to do open mic night so I would get a free red wine! My mum and dad didn’t really know I was doing it. Then someone just happened to be at one of those nights and that person worked for Universal! Right place, right time.”

Even before her open mic nights, Katie always had a passion for music. She says: “I’ve always loved music. For as long as I can remember I’d be making up wee melodies – I just didn’t know you could do it as a career!” Thankfully she now does and is all set to return to the scene as Katie Sutherland with her single ‘Canvas’. Katie saysof the track: “It’s very upbeat and warm sounding. I wrote it when I’d just decided to change to Katie Sutherland, I’d just got engaged and life was quite good. I was starting a new chapter and feeling optimistic so it’s all about looking the future and giving it your all.”

Katie writes, or co-writes, all of her songs and says that she gets all her inspiration from films. “It’s great – when I go to the cinema I just pass it off as work,” she laughs. “I wrote my song ‘Life Is Beautiful’ not long after ‘500 Days Of Summer’ – they don’t always go exactly along with the films they’re inspired by but I get ideas from them.”

Now thats she’s gone independent, Katie finds the writing is much more natural. She explains: “The label used to send me to the States and I’d have to do a co-writing session every day with a different person. It’s quite hard when you don’t know a person – it’s kind of like stripping naked. It was a bit strange but when I’m doing it by myself it’s a lot easier.”

“Every day I get an idea for a melody or some sort of idea – usually when I’m driving – and I take it from there. I just let if flow naturally!”

Despite playing on some huge stages, Katie still suffers with pre-show nerves. “I get more terrified in front of a smaller group of people than a large crowd,” she says. “It’s not natural to stand up in front of a bunch of people, you know? You get used to it though. The SECC show with Elton John was one of my first 50 gigs and I was kind of thrown in to it. I was so nervous! I didn’t have a lot of experience back then – we did another show at a football stadium which held 25,000 people, it was ridiculous! It was outside and you could see everyone’s faces but I wasn’t nervous – I get more anxious going in to a room and playing for a label.”

As our interview ends, Katie takes off to prepare for the stage. Fans and press excitedly gathered around the stage area. The intimate venue fitted Katie’s voice perfectly as she performed tracks from her upcoming EP. Katie seemed relaxed and happy and blew the crowd away with her incredible vocals – it’s a very welcome return to the stage for Katie Sutherland…