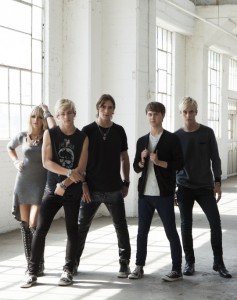 If you’d noticed a rise in screaming girls around Glasgow towards the end of last week, it may be due to the fact that LA band R5 have been in town. The Californian five-piece, made up of three brothers (Rocky, Ross and Riker), a sister (Rydell) and a friend (Ellington), took to the stage at the O2 ABC as part of their Louder tour which has been sold out up and down the country. They’ve already built up a huge following, thanks to guitarist Ross’s stint in Disney’s Teen Beach Movie and Austin & Ally, but it’s with their first UK tour that they’re showing us Brits what the band are really made of.  We were lucky enough to speak to the fivesome and get a look in at their rehearsal before the big night on Sauchiehall Street….

How did R5 get started?

Ross: It actually started at a really young age. Riker started teaching us dance moves from Michael Jackson videos and we’d put on shows for our families. We started dance classes then moved out to LA to be actors and it was there we discovered our love for music and met Ellington.

Ellington: It was never really planned like, “Right, let’s start a band today.” It just sort of happened

Rydell: It was more just for fun at first!

Ross: We just kept playing shows and eventually got a fanbase and a record deal…and that was that!

How would you describe R5’s sound?

Riker: We’re a pop-punk band. Our first album was very pop-influenced but it still has our rock roots. You really understand R5’s sound when you see us live! There’s a lot of energy and it’s constantly evolving.

Who are your biggest musical influences?

Ross: Paul McCartney. And just the Beatles in general.

Riker: U2 are so awesome and I also really like the 1975 right now.

Do you ever fight when you’re working together?

Rocky: We don’t fight but if we do argue it’s always about the band, like if we’re trying to define a sound for the album. We’ll try to work that out and find a happy medium.

Ross: Our current predicament is that we don’t want to alienate our younger generation of fans but we also want to move away from the super-heavy pop, especially as we’re all getting a bit older. We just want to sound like we do live: very guitar driven, very bass and drums.

Your debut album Louder was  released last year , how was the recording process?

Riker: We only had three weeks to record the whole thing.

Rocky: We normally have all the songs prepared before so we just have to go in, get them recorded and then make any changes.

Rydell: We made it as fun and relaxed as possible and our producers were really cool guys! 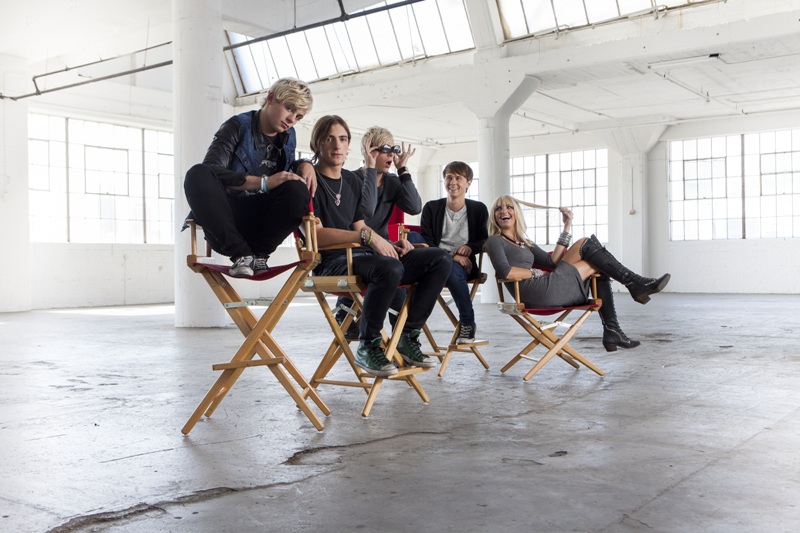 Do you have a favourite song on the album?

Ellington: My favourite is ‘One Last Dance’, it reminds me of songs I used to listen to when I was younger.

Ross: I like ‘If I Can’t Be With You’, because of the concept of the lyrics.

Rocky: I like ‘Ain’t No Way We’re Going Home’ because of my guitar solo!

Riker: Mine is ‘I Can’t Forget About You’ I feel like it’s a really strong song and I’m really proud of the way it turned out.

How’s your tour been going?

Rydell: We’ve not had much time to go out and see all the amazing cities we’ve been in but we’ve had a few days off so that’s cool. It’s been amazing meeting all the new fans.

Your fans are very passionate; what’s the craziest fan experience you’ve had?

Ellington: The craziest experiences are normally after a show when we go to the airport – one time in Japan we were expecting maybe ten fans to show up and it there was literally hundreds and hundreds of people.

Ross: In Italy, me and Riker went running through them all – which is probably not the best thing to do – and it was like a zombie movie. Just hoards of people from every direction!

So what’s next for you guys after this tour?

Rydell: Well we’ve actually been working on the songs for the second album…

Riker: They’re all pretty much written we just have to record them and pick which ones to use, it’s really exciting listening to the list of songs and thinking album number two’s ready to roll!

Keep up to date with the latest from R5 on Twitter, @officialR5