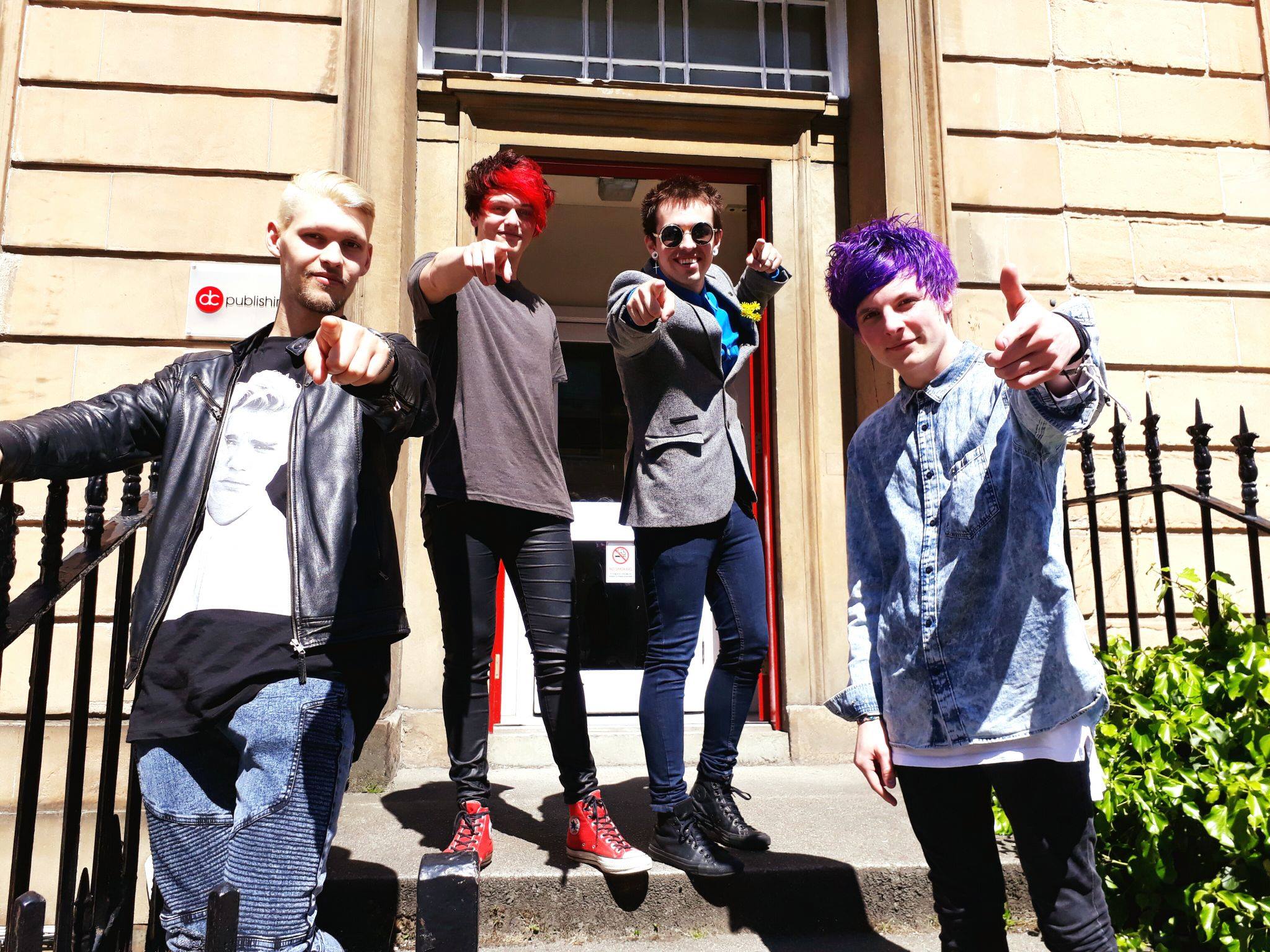 Hailed as the best unsigned band in Scotland, Single By Sunday are making grand, and colourful, waves across the music scene. Set to release their new EP Watch Out World on 2 June, the pop quartet from East Kilbride near Glasgow already have a stronghold of fans from Scotland to Germany, America to Mexico – even Paolo Nutini is into them.

Bouncing into the Source Magazine offices, Josh, Jonny, Jack and Jorge are full of enthusiasm as they get themselves ready for their upcoming tour. Set to perform a hometown gig in Glasgow’s Hard Rock Café – raising money for Nordoff Robins – and releasing a brand new song and music video, it’s all go for Scotland’s answer to 5SOS.

Hey guys! So how did you first became a band?

Jonny: I knew Josh from school, Jack from college and Jorge from another band. I didn’t actually know Jorge until I joined this other band. I was writing and Josh’s band was splitting up, thankfully, and falling to pieces.

Josh: That was a hard time for me.

Jonny: You’re a better singer now. Basically I was like, ‘Let’s all get together and jam and write stuff.’ It was originally me, Jack and Josh and then because I was still in the previous band I was in with Jorge I told him we needed a drummer, because we were going to Coventry to record. I said to Jorge, ‘Just to come to Coventry.’ I knew it might not be his thing but to come along. He came to Coventry and we smashed it.

What was the reasoning behind the name Single By Sunday?

Jonny: Yeah, we don’t tell anybody. We genuinely don’t.

You’ve got a brand new EP coming out on 2 June too. Tell us about it!

Jonny: Jorge blasts it on the drums. We go for three days and in the first day it’s drums, second day it’s guitars and bass and the third day vocals. The first time we did it, we recorded five tracks in one day and then the second time we went it was nine tracks in one day. I think the goal is to record an album in three days – we have about three albums’ worth of material already.

Jonny: It’s exciting times – and good because we’ve got a lot of fans in America and around the world and they really want to get [our songs] but obviously they have to wait until we release something. It’s good it’s actually going out now.

Three albums’ worth of material is amazing. Any thoughts on a full-length album?

Josh: We’re just going to sell all the songs.

Jorge: Be a publishing band; let everyone else have our stuff.

Jonny: I don’t know. I think we have enough good songs to have an album but for me, I write a lot, there’s not enough meaningful stuff. For me, if you have meaningful stuff it’s like the power to inspire people. When you listen to The Smiths it’s all stuff that’s factual, about news back then.

Jorge: Some of the best albums make up a story rather than just songs that are thrown together. Kind of like a concept album, for example Foo Fighters’ Sonic Highway. They deliberately went out their way to record it with eight different producers so if we’re going to write songs we need to make sure they fit a style, a certain pattern so it actually works as an album rather than throwing songs together.

You’re doing a lot of touring at the moment too. You’ve even got a big hometown gig next Friday for charity.

Jonny: On the night, we’ve also got the music video coming out for the single. It’s going to incorporate footage of us at the centres, live shows including parts of the O2 gig with our fans. It’s really awesome.

So the gig is sort of inspired by Live Aid?

Jonny: Yeah, we tried to get Bob Geldof the other day but he’s busy. I also tweeted Nicki Minaj so she might get involved [laughs].

Jorge: There’s no point in helping a charity and not giving them everything, that’s taking advantage of them. We thought why not release the song and give them all the royalties. We still work with the charity, we go to their events, we go and help the people, and we take part in the sessions. We went to the Penilee choir, Hearts in Harmony; we went to see how they would organise this kind of event.

What can folks expect from an SBS gig?

Jonny: the gigs are usually really jumpy. Jack and I like to make it moshy – because we want to make and write commercial music, we still want to keep the energy in the live shows.

Jack: From my influences, I want to take inspiration form them. Watching their live sets, the crazy stuff they do. I like to bring that to a pop band.

You guys have already achieved so much in such a short period of time. Where do you see yourselves in two years?

Jonny: In Morrissey’s arms! Or a Japan tour or, if it’s in the UK, the Barrowlands; the Barrowlands is a dream venue for me – the sound in there is amazing.

Jack: I would really like to be on a world tour.

Jorge: A European tour would be cool. I like a lot of places in Europe.

You can get Single By Sunday’s brand new EP, out on 2 June, here.