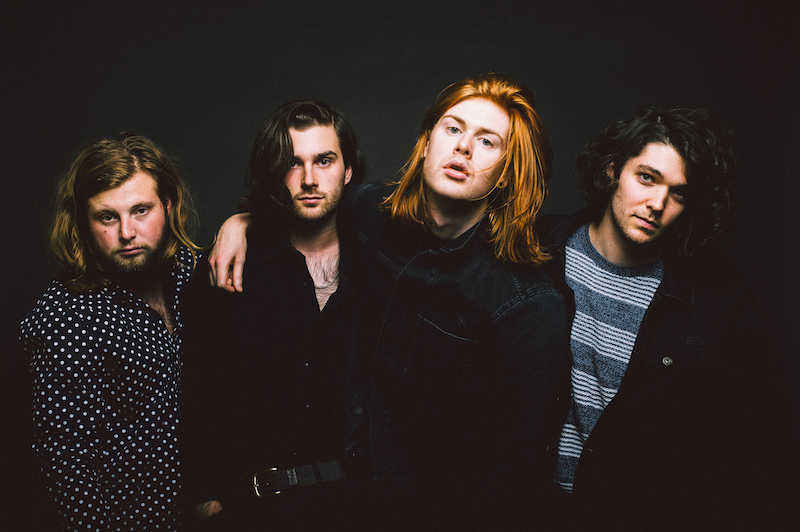 Reading quartet, The Amazons are making big waves with their infectious rock songs. Now set to release their debut self-titled album, they’re ready to prove they’re more than just a guitar band. Catching up with drummer, Joe Emmett we found out how The Amazons are changing the face of rock one raucous show at a time.

Your debut album is coming out soon – how does that feel?

May 26th! Mixed emotions, we’re exited because we’ve worked on it since April/May last year and it’s been about a year we’ve had it recorded. So the mastering and production that goes into it to get it finished is now done, so it’ll be a relief to finally get it out.

What can we expect from the album?

There are a couple of songs on there I can’t wait for people to hear. The general tone of the album is much more in keeping with In My Mind and Black Magic, which have a heavier, darker feel.

But there are a couple songs on the album that I think will surprise people. For example there is one with just Matt [singer] and a piano – I don’t think people will necessarily be expecting that having been hailed as a guitar band by critics. I’m excited to show a different side and emotion to us. We don’t just listen to rock, we’re inspired by so many different types of music and hopefully that comes across.

You worked with producer Catherine Marks (Wolf Alice) – how was that?

She was amazing actually, at getting a rapport out of us as a band. She would go old school in the sense she got us all in a room together to record live. So, a lot of what you hear is a single take, for example Junk Food Forever and Black Magic were one of 30 takes. It was done over and over again to capture the vibe of the song – that was such a great way of doing it because we focus so heavily on our live shows that energy, she tried to capture, which I personally think she did.

She was really helpful and great at thinking of different ways to do things. For example the song Raindrops actually started out much slower but she brought the tempo up so her wisdom, in a sense, adapted the song.

Congratulations on the headline tour too!

That’s crazy, we just finished a sold out headline tour in April which we’re really thankful for. We’re coming up to Edinburgh instead of Glasgow this time – the last time we played in Edinburgh it was in The Mash House so we haven’t been to Edinburgh in a while and we didn’t want to leave them out – there’s nothing like the Scottish crowd.

Festival season is just around the corner, which ones are you most looking forward to playing?

We’ve got a lot on. We’re doing the TRNSMT festival, which is great. It’s a shame T in the Park isn’t on this year, because it was so steeped in history and that was one we really wanted to do. I guess TRNSMT will replace it so it’s really good to be playing there in its first year – the line up is amazing.

As a band from Reading playing at this year’s Reading Festival, is it like a hometown gig?

It does feel like a hometown gig we played [Reading and Leeds] the last two years. We were on the Introducing Stage and now we’re on the Festival Republic Stage so it feels like a natural progression. It will be interesting to see how this year goes, last year we played to like two people and since then we’ve done quite a lot of touring so it’ll be interesting to see what kind of turnout we get – hopefully it’ll be a good one. Reading festival line up is how we deem success, not how much money you’ve got in the bank.

Can we expect any big bangs during your festival slots?

Do The Amazons have any future plans in place for album number two?

Matt is always writing different songs, but we’ve got to focus on getting this one out and touring as much as we can to promote the album over the next few years. Hopefully if this one goes well we’ll do another one.

You’ve just got to keep writing really, you don’t want to be put into a situation where the record company do give you another record and say you’ve got three months to get this one out and you haven’t written yet, suddenly you panic. We’re writing all the time and got little ideas but nothing at the moment.

Festivals, headline tours and a new album – what are you most looking forward to?

The Amazons are playing The Liquid Rooms in Edinburgh on 4 October. The band’s debut album is out on 26 May.