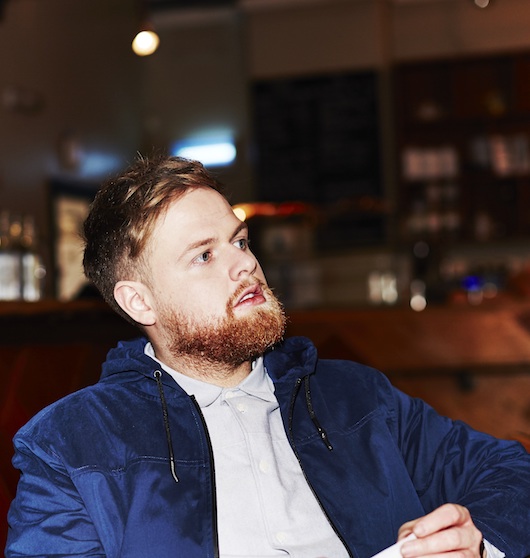 Tom Walker has always been mad for music, teaching himself to play guitar, drums, bass and piano before going on to study song writing at the London College of Contemporary Music – and all that hard work has paid off. He’s currently touring the UK, set to take on a European mini-tour and he’s got an EP ready for release too. We’ve got a feeling 2017 is going to be this singer-song writer’s year. We grabbed ten minutes with Tom before the first night of his tour in London yesterday…

How are you feeling about the tour?

I’m a little bit nervous. A lot of people are coming down. I’ve got everyone on the planet trying to get tickets or guest list. I’ve had so many emails – for the last week, it’s just been mad. It’s going to be mad!

You’re up in Glasgow next week. Have you played up here before?

Yeah, loads! I’ve played in King Tut’s, I’ve played in the I Café on Sauchiehall Street. I’m from Cumbernauld originally – I was born there and moved to England when I was three. I know Scotland well!

The crowds are always quite lively up here aren’t they?

The crowds are wicked. Especially at King Tut’s – I’ve played there twice, the crowds are always great. I love coming up to Scotland.

It’s great. You do a lot of support, and a lot of them are great, but some crowds aren’t interested. They’re there to see the main band. I get that – I’ve been guilty of that. You ignore the support and go mad when the main band come on. It’s a nice feeling, coming out and they’ve all come to see me. You just have to make sure you put on a good show for them!

Crazy. Lack of sleep. But a lot of fun. You meet a lot of people. I love travelling – even around the UK, it’s great. I’m heading out soon to do gigs in Europe – Berlin, Amsterdam, Zurich. I’ll be headlining little venues. After that, I’m off on a European tour with a band that I can’t mention at the moment because it hasn’t been announced, but that’ll be 15 dates throughout Europe. I’m looking forward to that.

What would be your dream venue to play?

I’d love to play the MEN Arena in Manchester. I saw a lot of my favourite bands there when I was growing up – Foo Fighters, Muse, ACDC.

How long have you been making music for now?

Longer than I care to admit! I’ve been playing guitar since I was about 12, and I’ve been songwriting since I was 16. So quite a while.

You’re self-taught in terms for the instruments you play. How did that work?

I basically bought the instruments and messed around until I could play them! It took a while. My dad bought me my first guitar for Christmas when I was about 12. When I was 14, I bought a bass from my mate for £80. When I was 15, I bought a drumkit off a mate for £100 and slowly I started putting it all together. The town I grew up in, there was no one else I could play with so I had to be a one-man-band until I got to college.

You studied song writing at uni. How did that change your approach to music?

It was so good. We’d basically sit down, listen to songs and pull them apart but at the same time, they were like, ‘There are rules, but there are no rules.’ I got to meet so many great musicians, and a lot of great songwriters, a lot of contacts in the industry too. It was a great thing.

What inspires your song writing?

Life really. That sounds like a total cliché but it’s true. I write songs about things that are personal to me. Not things that haven’t happened or I can’t connect to. I always try and write about what’s going on in my life, or things that have happened to me.

Did you not write one song about getting lost in London?

There’s a few songs about getting lost in London! [laughs] There’s one called The Show, which I’ve not put out but I play it live. I hadn’t got into a nightclub, so I bought a couple of beers and walked around London for four hours, taking in the city by foot. It was the middle of the summer so it was hot enough for a t-shirt and a hoodie. And I just walked about watching everyone in the street. In London, there’s a lot of hustle and bustle – there’s a lot to write about!

What other bands and artists have influenced you?

There’s so many. There’s a girl I’m listening to at the moment called Ray BLK, who I really, really love. She’s doing some great stuff. Paolo Nutini has been a massive influence. I like his style as well – he waits four years between albums, but when it comes, it’s amazing. Ray Charles is sick. Jack Garratt is really good.

What’s been the highlight of your career so far?

I’ve been working recently with a producer called Jim Abbiss, who did the first Arctic Monkey albums, he did Adele’s 19, he’s done albums with Kasabian. I started song writing because of that Arctic Monkeys album and now I’m in the studio doing an EP with him. It’s amazing. He’s a genius. He does everything pretty old school. His studio is absolutely magic – there’s all these guitars, old synths. It’s a magical place to work, really inspiring.

What’s next for you?

A lot of shows. The EP will be out at some point – we don’t have a release date yet, but the songs are coming together. It’s all going well!

What are your hopes for the rest of the year?

Just to have a good time really, and not get too caught up in the ‘business’ part of the music business. I want to focus on the music side of things. I want to enjoy the journey, play some good shows, meet cool people, travel, do shows abroad. Hopefully I’ll make it to America at some point this year too.

You’ve definitely got a more exciting year lined up than us!

[laughs] Trust me, I’ve had my share of boring years! I used to work as a photo booth attendant, then as a chef, working six days a week. So this is great!

See Tom live at The Garage, Glasgow, on 2 February. Get tickets from www.ticketmaster.co.uk.