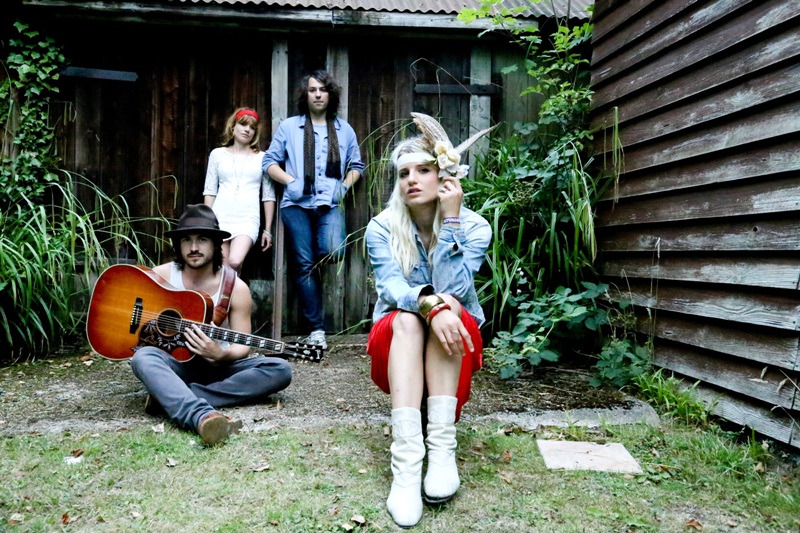 Influenced by old singer-songwriters with a healthy dose of the modern day, Wildflowers are a four piece band from various towns in England. Lead by Siddy, who comes over as rocked-up Jenny Lewis, James, Kit and Kendal all have great voices and masses of energy on stage. Laura Redpath caught up with them after they opened for Tom Odell at the O2 Academy.

So how did Wildfowers happen?

Siddy: James and I met at uni in Bristol and started a band. We’ve been working together for five years now. Kit and I were always working on various things together so she joined shortly after and Kendal appeared just a few months ago.

Kendal: They actually pinched me from an open mic night and asked me to join their band. That’s a more accurate description of I arrived here.

How does it feel to be opening for Tom Odell?

Siddy: Amazing! When we found out, our adrenaline was so high – he’s such a brilliant musician. We really like his work and his fans are so lovely. We’ve had the best reception we could hope for.

Kit: It’s very different but it’s nice to be a support act. In a way, the pressure is off.

Siddy: It’s nice because we can sound check last, and then just leave our stuff waiting on stage. There’s no expectations – we can just play. On this tour it’s been great as everyone has seemed to really enjoy us.

Do you have a favourite venue to play in Scotland?

Siddy: This is actually our first time playing in Scotland so we’ll say the O2 Academy, haha. The sound people are actually the best we’ve had and everything sounded great on stage.

James: And Kendal and I have never even been to Scotland until now! So far we’ve found it to be very wet, but friendly.

You guys have a great sense of style – where do you buy your clothes?

Siddy: I had tonight’s dress made. I designed it, chose the material and the dressmaker put it all together for me. I really want to design more as I find it hard to find unique items and getting stuff to fit perfectly can be a nightmare!

Kit: Me and James get a lot of stuff form vintage shops in Brighton, there’s really cool shops there. You can spend all day rummaging in them.

Kendal: My signature hat is from a vintage shop in San Francisco.

Have you ever felt stigmatised, or been given special treatment, because the band is female-fronted?

Siddy: Do you know what, no. As soon as you soundcheck well, record labels take you seriously. I’ve never had a bad experience. It all depends on how you portray yourself – I’m sure if you’re a shy person there’s more chance of not doing as well.

Kit: I’ve never had any other trouble either.

James: Plus you have us boys to protect you…

Siddy: Nah, we don’t need them! [laughter] Kit and I are way more scary than James and Kendal.

Talk us through your songwriting process.

Siddy: James and I usually start things off. James starts playing a riff on guitar and I’ll sing over the top to see what works. But sometimes me and Kit sit down and write together. Our stuff usually begins with a riff and everything is built around it – we improvise a lot. We record ourselves and then play it back to see what we like and what we don’t.

James: We’ll record something and we’ll only change a few words. Our song Take Me to the River was written on a freestyle whim.

Which one of your songs, so far, has the most significant meaning?

Siddy: I think Take Me Home, as it’s how I always imagined my band sounding and it finally got there. It’s really powerful with all of our voices put together.

Kit: When we play that song live, we are at our most relaxed – we love the song.

If you could be a fly on the wall in any musician’s studio, dead or alive, whose  wall would you rest on?

Siddy: I would have liked to have seen Bessie Smith – an old blues singer–  or Patsy Cline. I’ve seen videos of her record and I like the idea of having the whole band gathered one round microphone and the sound it produces.

Kit: I’d like to see Joan Armatrading record as she plays every instrument needed for the tracks.

Kendall: Bob Dylan’s Highway 61 is something I would liked to have seen being recorded. Instead of recording with his usual acoustic approach, which everyone expected, he turned up with a full band and recorded an electric album. Amazing.

James: I would pick Led Zeppelin – my favourite band of all time. Every album is as good as the last and we recently supported them and it was just a great experience.

And which wildflower best represents the band as a whole?

Wildfowers’ EP, Where the Flowers Don’t Grow, is available on iTunes and if you missed the recent gig, you can catch them at Glasgow’s Nice N Sleazy’s on 6 March as part of their headline tour.