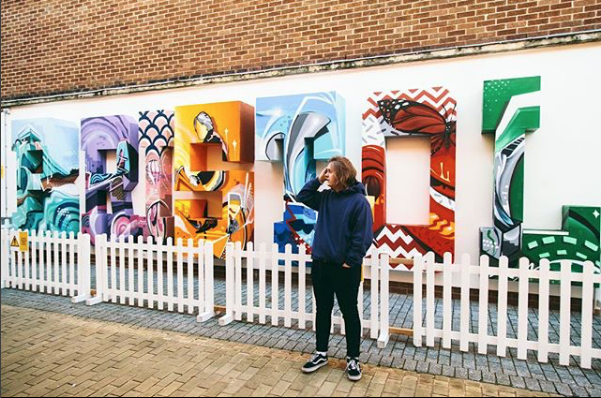 He played a sold-out gig at the iconic King Tut’s before he’d even released a single, performed in front of a massive crowd at last year’s TRNSMT, and he spent an epic month-long writing and recording trip in the States – it’s all going pretty well for Bathgate native Lewis Capaldi. We caught up with the up-and-coming singer-songwriter about his journey in music so far

You had a pretty exciting summer in 2017. What would you say was the highlight?

Probably TRNSMT festival in Glasgow. Just the fact that I was a bit insure about how it would go. Just because it was my first time, I didn’t know how many people were going to turn up and see me – but it was mobbed. It was crazy to see all those people, and they seemed to know the songs. It was mental.

How did your music career get started in the first place?

My brother was always in bands, and he was into music that was a bit heavier. So I copied him basically. I learned to play guitar and had my first gig at 12. I was in bands and writing songs myself. So I was playing in bands, gigging, then started playing myself. I went to college and did music, and I’d done so much gigging, to the point where it felt like a natural thing. When I met my manager when I was 18, that’s when things started to happen.

What kind of music did you listen to growing up?

My brother was into heaver stuff so I was into bands like Slipknot and stuff like that. That was the heavier side of things. I’d also listen to bands like Foo Fighters and Nirvana – not that heavy, but guitar bands. And my sister was into pop. When I was younger, I loved Busted! They have some tunes. Then I started to lean more towards indie music, The Strokes, Arctic Monkeys, The View, bands like that.

What music inspires your songwriting?

At 16, if a song was in the charts, I’d be like, I’m not listening to that. But I soon realised those songs were amazing. One Direction have class songs! That made me write a bit differently. I used to just copy Kyle Falconer. But I started to do more commercial-sounding stuff – but still writing the best songs I could, but pop melodies.

How close are we to getting an album from you?

The album is a wee bit off I think. Just now I’m concentrating on singles, maybe an EP towards the end of the year, but the album will be late next year.

I’ve never been like, ‘I want to do this, this and this.’ Last year was so mental – absolutely mad. I never expected that. I’m just going to keep riding it until someone says, ‘Right you. You’ve had your fill.’ I just want to keep on doing what I’m doing – keep blagging it as long as possible. To keep on making people think that I’m actually any good!

You’ve got everyone fooled just now!

It’s a good start! Hopefully I can keep it up.