He’s tickled the funny bones of the nation as a camp tank commander, been a part of one of the most bonkers student house shares on TV and worked with some of the biggest names in comedy to boot. Scots telly star Greg McHugh sat down with Source’s Lindsay Cochrane to talk acting, uni memories and mental former flat mates…

Having harboured dreams of being an actor since Higher drama classes at St Thomas of Aquin’s in Edinburgh, it took a degree, a drama postgrad, plenty of stand up comedy nights, a move to London, a few rubbish jobs and over a decade of hard work before Greg McHugh finally got the big break he’d always wanted.

Despite seeing his own creation Gary: Tank Commander become a smash hit, followed by winning the part of loner Howard in Channel 4 student sitcom Fresh Meat, Greg can still hardly believe his luck.

“To get to make a show is great, full stop,” Greg explains. “But to make a show which people love… God, it’s all downhill from here! I keep thinking someone will say, ‘Oh, we were only kidding on.’ I’m very privileged to get to do what I do.”

Today, Greg’s taken some time out of filming series two of Fresh Meat, the latest creation from the minds behind Peep Show, Jesse Armstrong and Sam Blain. Premiering last year, the sharply-written comedy has received rave reviews. Starring Jack Whitehall, Kimberley Nixon and Robert Webb, telly fans were hooked on the madcap misadventures of a dysfunctional group of freshers living in a grubby student house at the fictional Manchester Medlock University. So what has series two got to offer?

“Well, Howard gets a part-time job in an abattoir, which is a lot of fun,” Greg says. “Howard is slightly more comfortable with his housemates. It’s their second year so they’re getting to know each other a bit more. There are some new housemates – I don’t really know how much more I can say about that! There’s more emotional turmoil for JP, Jodie goes a bit mental – everyone’s got really mental things going on this year, they’ve really upped the stakes.”

While comedy soldier Gary made Greg a hit in Scotland, it was socially-awkward geology student Howard who helped him break the whole of Britain. But, Greg says, it’s not his acting ability which has captured their attention – it’s all about the knitwear.

“You know, I’ve had more comments about my jumpers than anything else,” he says with a laugh. “People are going mad for the old Howard sheep jumper! On the first day of filming, people were like, ‘Oh, man, where’d you get that jumper from?’ It’s all down to our brilliant costume designer, June Nevin!”

Playing a student brings back a lot of memories for Greg, who graduated with a 2.1 in business studies from Stirling University, followed by a postrgrad in performance and acting from Glasgow’s RSAMD.

“I kind of knew I didn’t want to go to university,” Greg admits. “But I didn’t really have the courage to go straight to drama school. I met loads of great people at Stirling – some of my best friends I met at uni. It was great. I kind of concentrated more on the fun element than the academic though.”

Like his Fresh Meat counterpart, he lived with some interesting characters along the way too.

“I’ve lived with some totally bonkers people!” he laughs. “I lived with a couple of girls who actually poisoned someone. They didn’t kill him but he was hospitalised. They tried to play a joke on him and ended up poisoning him. I lived with a guy who wouldn’t leave his toothbrush in the bathroom – I don’t know what had happened to him in a previous flat share! He was insane.”

After education, Greg moved into the world of battling it out with the rest of the country’s aspiring actors. He took on a range of different jobs while getting small parts in the likes of Still Game and extra work.

“One of the worst jobs I’ve ever had was working in a call centre,” he admits. “It nearly broke me. I met some really lovely people working there, but everyone around me hated their job. That’s really what made me decide that I had to do a job that I love. Sometimes a really bad job is a good motivator to make you eventually do what you want to do.” 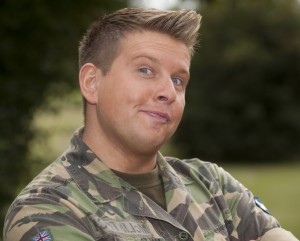 And motivate him it did. During his many turns at stand up, the character we now know as Gary was born, a super-camp, perma-tanned, highlighted army tank commander. After a one-off pilot on More4, the idea was snapped up by the BBC, with Greg writing the series himself, as well as playing the part of Gary. Was it difficult going from having total control over his show to being handed scripts on Fresh Meat?

“Oh no! That’s the dream job!” he says. “I’m not a disciplined writer. Anyone who knows me knows how much I hate it. It’s just hard work, it’s a slog, people keep telling you it’s wrong all the time – it’s never ending. When you do a Sam Bain and Jesse Armstrong-led script – the scripts are brilliant. You turn up, you say the lines and then people kind of applaud you. You get lots of nice compliments. But actually, it’s the writers that do all the work.”

And the compliments are set to keep rolling in, as the autumn TV schedules are set to be all about McHugh with the new series of both Fresh Meat and Gary: Tank Commander hitting out screens. There’s no denying that life is pretty sweet right now.

Fresh Meat returns for series 2 on Channel 4 this autumn.