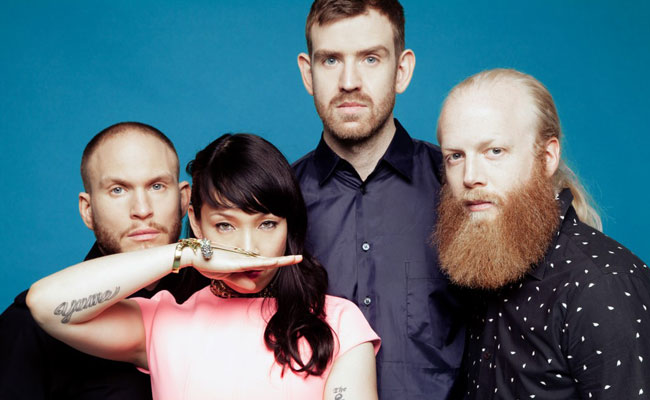 Little Dragon, the Swedish four-piece known for their off the wall RnB electro pop, creep onstage without much of a fuss. They enter slowly, wild figures flickering under the lights, largely masked by steam and smoke. Much like their audience, the silhouettes are all beards and man buns, apart from the stray pixie-like figure of lead singer Yukimi Nagano. Slicked back hair and jittery hips underneath an angular skirt, her body is bound from head to toe in a striped catsuit topped off with a swathe of see-through fabric fixed like a jacket. Imagine Bowie went to space via Toyko.

Her hands jerk and her feet stamp as she coaxes the crowd out of the corners and into the ribbons of light in front of the stage. They begin the set with Mirror, a new song from their latest album Nabuma Rubberband but the crowd appear slow to warm up – the room divided like shy kids at a school disco. Soon however Little Dragons’ celestial rhythm and infections beats demand that bags be dropped and coats flung off. The room and atmosphere starts to warm up very, very quickly as Yukimi sprints around the stage and thrashes a cow bell high into the air. My friend pulls me deeper into the dancing crowd.

‘What do you think?’ she yells over the deafening bass line.

‘It’s like if Ross from Friends could actually play keyboard.’

Confession time: I had never really listened to that much Little Dragon before. I knew the famous holy trinity: Twice, Ritual Union and Wildfire off by heart but apart from that my knowledge was fairly limited. Turns out, that didn’t really matter. All that matters is that Little Dragon really know how to throw a good party. Unapologetically leaping from track to track, unpredictable and sinuous all at once, the stage almost seemed too small for them. Yukimi’s vocals soared above the manic drums – her soulful voice the perfect juxtaposition against the electro beats. You can see why the likes of Pharrell Williams and Diplo are falling over themselves to work with the Gothenburg quartet (apparently both producers were turned down) and Kendrick Lamar was front row at their show last year. What Little Dragon provided was a headline festival act, wild club night and extravagant house party all in one. This was not a night to quietly mouth lyrics and shuffle along to a beat. Tracks blended into jam-like sessions, the musicians grinning at each other as they played , the drummer on his feet throughout the set. Cider was spilt as bodies twisted out of joint to try and keep up with the music blasting from the stage. People turned away from the stage to dance manically face to face. Girls and boys threw themselves around loose limbed and sweaty faced. A dead ringer of the mum in About a Boy commanded the centre of the dance floor. This, undoubtedly, was music to dance to.

‘This is what every club in the world should be like,’ proclaimed the girl next to me. From a Glasgow crowd, is there ever a better review than that?