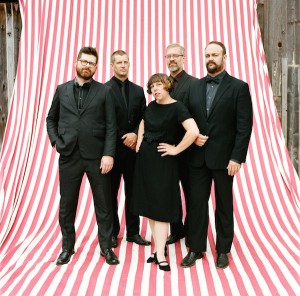 After four years of silence following the success of their number 1 album The King is Dead , everyone’s favorite indie-rock oddballs are back, at last, with a brand new album. And what better place to kick of a seven-stop UK tour than the undisputable hometown of folky-rocky-pop? Glasgow’s O2 Academy welcomed The Decemberists (and many a bearded hipster) on Friday night, hosting an unstoppable set that bounced from accordion-laced ballads to sing-a-longs backed by a glockenspiel and banjo. What more would you expect from the group from Portland that sounds more whimsical that a Zooey Deschanel-made mixtape?

In some ways the band plays up to their quirkier-than-thou indie charm – lead signer Colin Meloy muses about their alternative status – “You can hear this on the dusty corners of the radio” – between discussions about Glasgow’s best falafel joints. Even the drummer is adorned in a three piece tweed suit and a tie.

All sounds a bit much right? Yet to make fun of their hipster credentials doesn’t do service to their anthemic pop songs and – more importantly – the audience’s attachment to them. “One more time with feeling,” Meloy cries above the sound of the crowd’s storming roars and applause.

Though their core sensibility is pure folk-rock – having brought the genre to the American masses in the same way Mumford & Sons have over here – this is indie with intelligence. In their best tracks, there are echoes of early R.E.M, at worst it all goes a bit Green Day. There are a few dips in the set as the band relax into slowed down rocky ballads, but those moments are easily forgotten – especially with songs like The Rake’s Song climaxing with five members of the band banging wildly on drums.

Watching their set, you could almost believe you’d stumbled in on a private jamming session were in not euphoric howls of the crowd, whose love for this band has clearly stretched over many years and even more hits. “We know we belong to you,” Meloy croons in his signature gravel. And don’t the audience just love them for it.