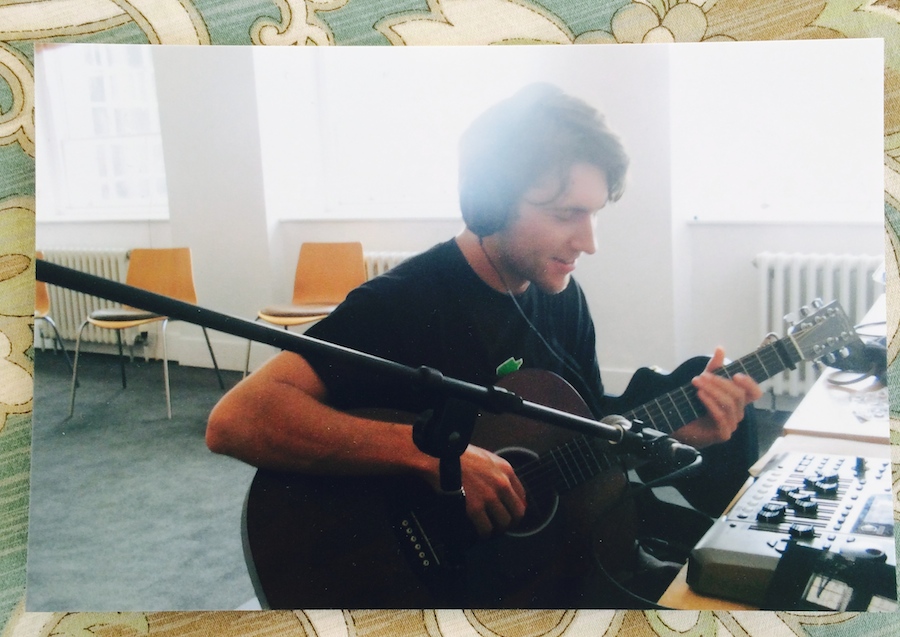 Let’s be honest – how many people do you meet that say they want to be a musician, a pop star or a rock star, and how many actually make it? Shows like The X Factor make the music business seem so straight forward, but the reality of making it in music is much tougher – so how do you actually go about doing it? Stirling Uni graduate Jason Riddell is one up and coming Scottish musician who’s found this out for himself – and after tonnes of hard graft, gigging, writing and networking, he’s just released his first EP. We spoke to the singer-songwriter to find out how he worked his way up and to get his tips on how to do the same.

When did you decide you wanted to pursue music?

I was about 13, so 12 years ago. It’s definitely something that’s always been there for me.

What made you decide to pursue music, especially so young?

I grew up with a lot of musicians. There was one guy who wrote songs, and I thought, ‘How do you do that?’ He just said: “Do anything that you want, at all, and don’t think about it.” So I thought, yeah, that sounds fun.

Did you work on your music while you were in school?

I used to sing with my music teacher but it was classical singing, and he was always saying: “Don’t do any of that pop nonsense, just do classical.” But I didn’t really care about subjects at school, anyway. I was on tour a couple of times with a band at school, a grunge band, that was probably more of a detraction from studying, to be honest with you.

So, school went on the back burner? Touring and being a rock star instead?

No, I’ve never enjoyed that thing. We did meet lots of people who have big dressing rooms and big egos, and stuff like that but I’ve always just thought about that one person. You’re always writing for one person, or playing to the kid in the back seat of the car with headphones on. That’s a thing I like to keep in mind. That one person doesn’t really care if you have a lot of people adoring you, do they? It’s about making people feel less alone.

What was it like being on tour so young?

Really good fun! It was a while ago now but it was amazing. Staying at Travelodges and doing really stupid things. It was really fun.

What about university? You weren’t doing music as a degree, but did you find that your uni experience has helped?

Songwriting-wise, definitely. When I’m writing songs, I think about books; it’s definitely a stimulus. I was doing an arts degree, so it was kind of fitting. I have a song called Strange Case of Flynn, and I was reading Scottish literature – Robert Louis Stevenson, James Hogg – so there’s a kind of duality in it. That’s definitely the influence in that song. I have a song called Wendy, Please, that’s kind of like Peter Pan. Storytelling and fiction is definitely a big help.

Now that your EP is out, are you focussing on music more, especially since you’re out of university?

Yeah, I think so. Over the last year, it has picked up a little more. I’ve supported bands and I’ve played in Italy. Those experiences are really good, but the EP – this guy called Kenny Bates got in touch with me, from The Tollbooth in Stirling, and they’ve basically got a music development fund. They get money from Creative Scotland and then The Tollbooth has this fund and they help up and coming artists. The EP’s been great fun, especially the artwork. I got in touch with Toby Philp from ANTA (a Highland pottery company) and he gave me these options, these paintings, amazing big paintings. I think that they’ve helped make it more of a package. I did need a kick from Kenny to actually do it. I had been writing for a long time and hadn’t really released much and now I’ve released my first EP.

How do you go about getting gigs?

The very first times I was playing, I was really naive and had absolutely no inhibitions. Pretty much as soon as I got on stage, I felt really at home. Then… like you do as a teen, I became very self-aware, and nervous. I’d say open mic nights are good; I did a lot of open mic nights. And there are loads. Stirling has really good ones – Mediterranea, that’s good for open mic nights. Then, emailing, that’s how you get other gigs. But you’ve got to watch out for shady promoters. The ideal thing is for people to get in touch with you and they start to like your music, so you just keep working. Hopefully people will come to you. Just be honest, be as nice as you can.

How did you end up playing at Umbria Rock Festival in Italy?

That was Saul [my friend], he mentioned this festival to me. It’s in its first year and there were a lot of UK artists in it. It was a giant leap because I didn’t really feel that I was at that level. It was rock-based and there were a lot of UK stalwarts like Paul Weller and Kaiser Chiefs. It was really good, it was relaxed, and it wasn’t huge but I hope it’s going to grow. It was incredibly well-run, they definitely put a lot of effort into this festival.

Do you still get nervous when you’re playing for people?

Yeah, it depends day-to-day, like anything. I’m quite a nervous person sometimes, other times not. Depends how you feel. Usually after the first song, it’s all good but it is quite nerve-racking. But I think the best feeling is when after you’ve finished a song, there’s a round of applause and then there’s silence because they’re waiting for the next one. That’s amazing and then you can have fun, and talk to them, it’s really nice.

What advice would you give to someone who wants to pursue a career in music?

I would say never get caught up in what a large group of people think, always try and get through to that one person. And just do it. That’s the most important thing.