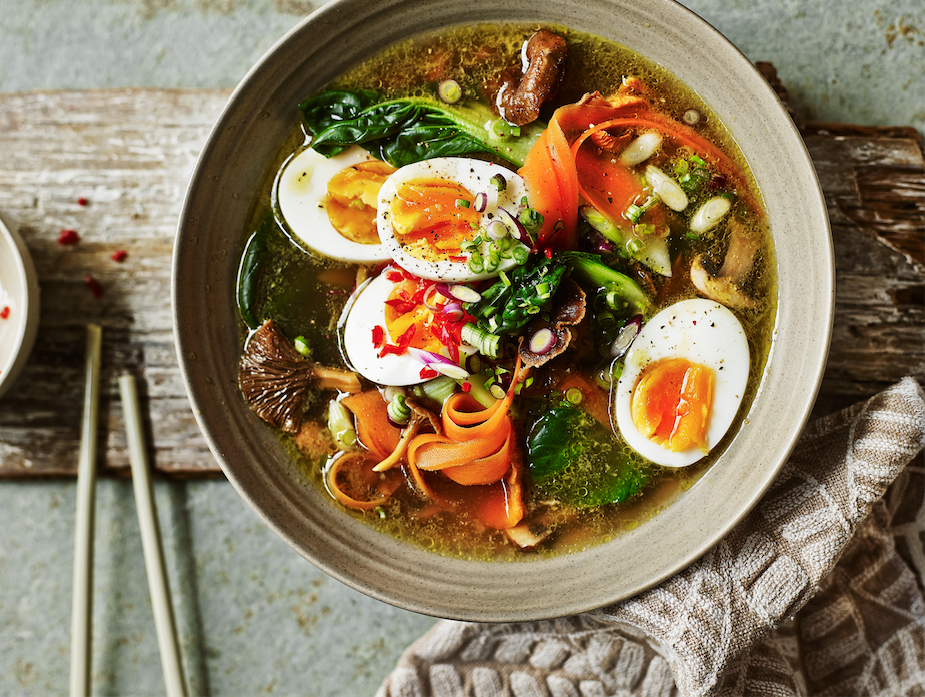 I love pho for supper; it’s a Vietnamese-inspired soup with plenty of heartwarming veg. This is the perfect light meal for a cold night when you’re looking to get loads of vitamins in one hit.

100g wild or button mushrooms, chopped in half

I'm so excited for @bigfeastival this weekend with @brita.uk as one of their ambassadors! I'll be teaching two yoga classes a day on Friday 26th and Saturday 27th August where I'll work with you on strengthening and lengthening that beautiful body of yours. Dance to my vinyasa flow class, whether you're an experienced yogi or just starting out. We'll be rehydrating throughout and during the day with filtered water from the BRITA Fill & Go which will cleanse the body and provide it with essential nutrients you need to carry on munching through your weekend at The Big Feastival💙 #BRITA #madeleineshaw #gettheglow

Heat the oil or butter in a pan, throw in the garlic and ginger and cook for 30 seconds, then throw in the mushrooms and stir-fry for 2 minutes. Pour over the stock, tamari, star anise and cinnamon stick and bring to a boil, then reduce to a simmer and cook for 10 minutes. Throw the carrots and pak choi into the soup to cook for a further 7 minutes while you prepare the eggs.

Gently lower the eggs one by one into a pan half-filled with boiling water and boil for 5 minutes for runny yolks and 9 minutes for hard-boiled. Drain and hold under cold running water to stop them cooking and to cool them enough to peel.

Ladle the soup into two bowls, slice the eggs in half and place on top of the soup. Throw the chilli and spring onions over the soup to serve.

When you come across the cinnamon stick or star anise, remove them, they are there to add flavour to the soup but not to be eaten.

Don’t forget to tag us in your Monday Meal and use the hashtag!