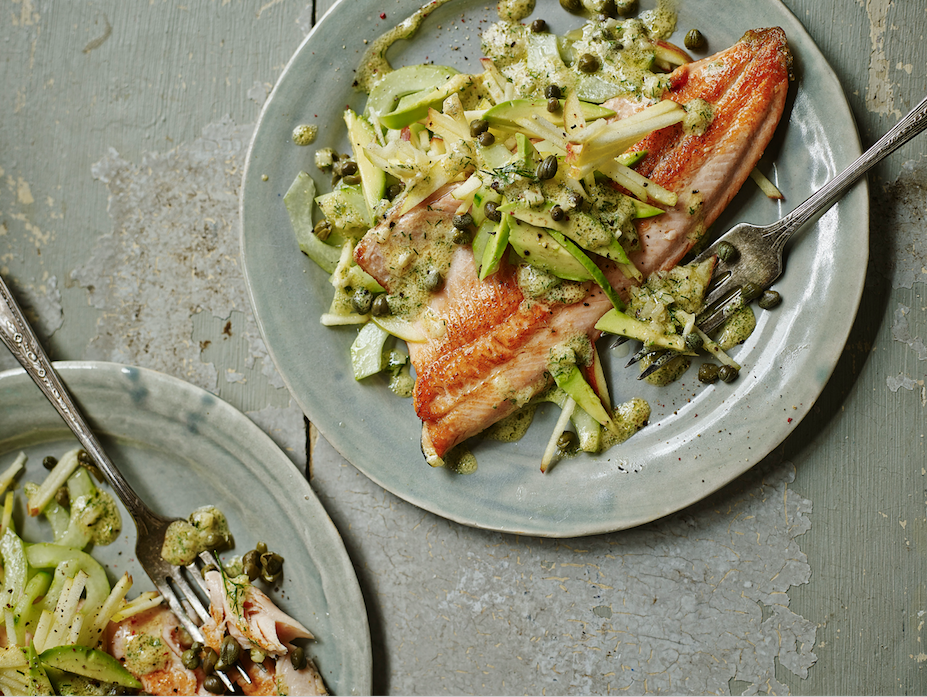 The sweetness of the apple really goes well with this strong-flavoured fish, but if you can’t find trout fillets you could use salmon instead. Although capers are known to be high in sodium, they add an extra burst of flavour, which is just what fish needs.

Final tasting for my event Friday. I'm hosting a very special event @themagazineldn Park Table Dinner on Friday 9th September. The Magazine is next to the Serpentine Sackler Gallery, right in the middle of beautiful Hyde Park and I really think it's one of the most incredible and iconic locations I have ever hosted a dinner. The evening will commence with a reception followed by a three-course menu created by me with the help of trainee chefs from the Café from Crisis, a social enterprise training space. The event costs £55 per person including cocktail, canapé reception, starter, main and dessert. I would love you to come along and taste my food! Book your seats via the link in my bio #madeleineshaw #gettheglow #zahahadid

Place the cucumber slices in a colander, sprinkle with salt and let them sit to draw out the excess water for 10–15 minutes while you

prepare the rest of the dish. Make the dressing by mixing the mustard, dill, vinegar and olive oil together with a pinch of salt. Thinly slice the avocado and apple

and throw into the dressing to stop them browning, along with the shallots, stirring well to combine.

Heat the oil or butter in a frying pan on a medium heat, throw in the capers and stir for 30 seconds then move them to the edges of the pan and throw in the trout, skin side down. Sprinkle over a little salt and cook for 5 minutes until the skin is crisp, then flip the fish over and cook for another minutes or so until almost cooked through.

The cooking time will depend on the thickness of the fillet, but look for golden skin, a bronzed top and flesh that is opaque all the way through. Rinse the cucumber, drain and then pat dry with some kitchen paper and mix in with the salad.

Divide the salad among two plates and serve with the fish and a sprinkle of capers.

Tweet us your pictures of the dish and don’t forget to use the hashtag #mondaymeals.