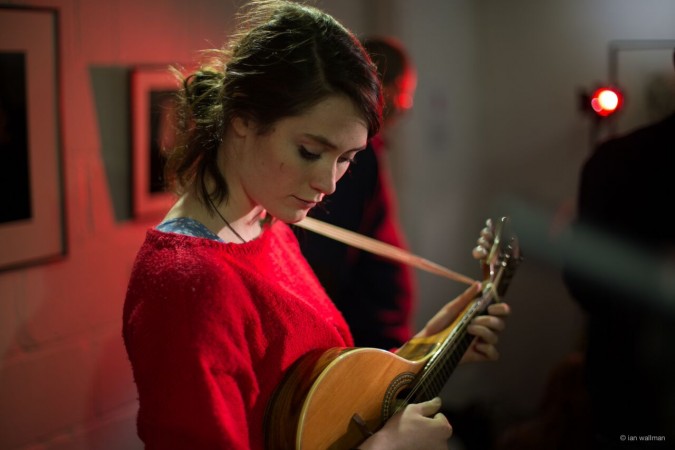 Scottish folk singer-songwriter Rachel Sermanni has grown in musical recognition since performing at Celtic Connections in 2011, followed by her debut album Under Mountains in 2012. Rachel, 23, has toured across the world in the past four years and has shared the stage with the likes of Rumer, Mumford and Sons and Elvis Costello. We caught up with her prior to her latest release, Tied To The Moon, to talk about her musical influences, learning Led Zeppelin songs and abstaining from Facebook to get creative…

What inspired you to get into music?

I always had a good ear picking up tunes and remembering tunes. There were a lot of influences but when I moved to Carrbridge, in Granton-on-Spey, the kids were given the opportunity to play traditional music and this had a huge affect on me. What my parents listened to influenced me as well.

What did your parents listen to?

When we were in the car on our holidays, usually in the west coast of Scotland, we’d be listening to Karine Polwart and Kate Rusby. My all-time favourite album is Songbird by Eva Cassidy. But it was really when I moved down to Glasgow that I started to explore my own tastes and I was introduced to jazz and people like Bjork. But my all time favourite at the moment is a guy called Sam Amidon, an American folk artist.

When did you start playing guitar?

When I was about 14. There was always a little nylon-string sitting around the house. My Dad’s friend taught me Stairway to Heaven (by Led Zeppelin). It’s a total classic and made me very cool in school for a while! It felt like a very natural process to put chords and words together to create my own songs.

How do you stay creative?

I think staying open, and not believing you have to hold on and grasp anything. If I’m not feeling creative, I just let that be instead of struggling. Usually if I have a couple of days away from the internet, the outputs are massive compared to having Facebook to hand! Without being too negative of Facebook because it can be great, to be creative demands a need to be able to connect with myself.

What do you enjoy most about being a musician?

I love playing and singing. When I’m touring, it’s focussed around the gig and the giving of the performance. I love gigging, and I love travelling. The part I don’t like about the travelling is the packing! I’m a light traveller but the heavy guitar case and mandolin make me feel exhausted. But it’s an OK price to pay in the end.

You’re about to release your latest album, Tied To The Moon. How does it differ to your previous albums?

If you compare it with my previous recordings, it’s almost a perfect balance between a studio recording like Under Mountains and two EPs called the Boatshed Sessions and the Bothy Sessions. They were recorded over one night and were completely spontaneous. I’m fond of the live aspects of recording, but this is a perfect balance because a lot of it was recorded live but over a two week period, in a make-shift studio in the islands with a whole bunch of people. The album is far more rhythmical and energetic than Under Mountains.

Tell us about the background to Tied To The Moon.

The core of the album was written when I had four days of no internet access, and provided the most idyllic apartment above a pottery studio in the middle of nowhere in Nova Scotia. I intended to go and have some peace, but I ended up reading and writing loads, and my suppressed feelings were beginning to rise. I wrote seven songs and four of them are now on the album. I recorded them in March last year in Canada and by October I was in the Isle of Lewis making the album. The feelings in the songs are about letting go in relationships with others and parts of myself, and generally growing up.

What advice would you give to Source readers who want to go into music?

To gig, gig and gig some more! The constant playing gets you out there and gets you discovered. If you’re just starting out, there is to lots to discover about yourself; how you play, what you play and what you represent. Generally, stay healthy, and if you’re touring, make sure you get enough sleep.

Tied To The Moon is out now. For more information on Rachel, visit rachelsermanni.net