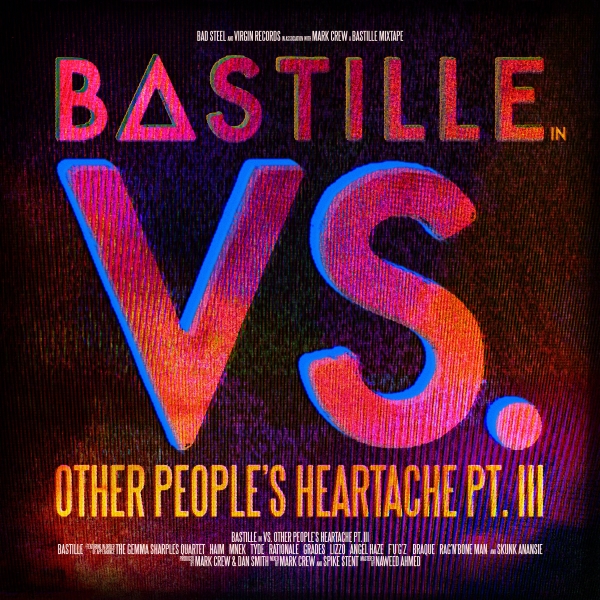 Collaborations can be make-or-break for artists. Some duets can leave you wanting to wash out your ears (Robbie Williams and Nicole Kidman, anyone?). Yet some feel like someone has opened a new door in your life to fantastic music and you want that collaboration just to become a band in its own right.

A band with a talent for creating striking mixes and collabs is Bastille – one of the few artists who does it well. VS (Other People’s Heartache, Pt III) is another mixtape from Bastille made up of collabs with other artists. This album continues along the same vein as the two previous mixtape albums, both titled Other People’s Heartache.

VS contains a spectacular range of collabs which are the production of collaborations with other artists such as Haim, MNEK and The Gemma Sharples Quartet.

Many of the tracks have a distinct Bastille touch with Dan Smith’s soulful vocals, yet some tracks feel like dance remixes for example, Torn Apart ptII featuring Grades vs Lizzo, but the big club feel is thrown off by Lizzo’s fierce rap style.

Another fantastic track on the album is Weapon featuring the rapper Angel Haze as well as FUGZ, and Braque which completes the almost aggressiveness of the track.

The album is only nine tracks long but seems to transcend a lot of genres. I never thought that Smith’s voice could be teamed so seamlessly with rap and grime.

The Driver is typical Bastille style with a touch of sad guitar riffs mixed with electronica. At first, the song is off-putting with its abrupt changes in tone but it’s one of those songs that grows on you after a few listens.

The collaborations are very interesting to listen to. It’s fascinating to see how the artists involved pull together their styles to create truly unique tracks. It’s because of this that it almost seems strange to release it under Bastille’s name when it is mainly collaborations.

Overall, Vs is an excellent collection of collaborations, with the small exception of The Driver. The collaborators are varied and make the record diverse; these artists deserve a lookup in their own right, such as Angel Haze.

Rachel is studying Journalism and Creative Writing at Strathclyde Uni, while juggling all the writing she can muster time for.