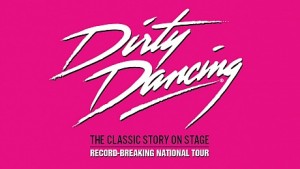 I was never a big Dirty Dancing fan, so when I heard the hit film had been adapted for the stage, my expectations weren’t high. You see, I never liked the idea of a musical where the lead characters don’t sing – but to my surprise, it actually worked.

What I loved about this production is that the audience were able to focus on the plot, without being bombarded by constant musical numbers. The singers were merely on the side-lines, making room for Baby (Roseanna Frasconna) and Johnny (Gareth Bailey) to take centre stage. Baby, a girl from an upper-class background, is on vacation with her family, where she meets brooding (but handsome) dance instructor Johnny – and the rest is history.

Like most musicals, this was such a success due to the talented cast. The chemistry between Frasconna and Bailey was undeniable – they did Patrick and Jennifer proud.

Frasconna’s performance was mesmerizing. She excellently portrayed the kind-hearted, quirky character that is Baby, a woman on the road to self-discovery. Frasconna managed to capture the crowd’s attention without being too full on– not to mention that she’s the spitting image of Jennifer Grey. But it was ultimately Gareth Bailey who stole the show. The moment he stepped on stage, the crowd’s applause was earth-shattering. Never before had I heard such a reaction to a male lead – and it’s not hard to guess why. He danced as if it were the most natural thing in the world, and his stage presence was immense. And dare I say it, but he was far more swoon-worthy than Patrick Swayze.

But we can’t forget the musical numbers. The show featured its most well-known hits, Be My Baby, Hey! Baby, Hungry Eyes and the classic (I’ve had) The Time of my Life. The dancers were equally, if not more so, brilliant. Each dancer was impressive in their own right, but most notably Penny (Claire Rogers). Rogers stood out like no other, her dancing skills impeccable.

But it wasn’t just the cast that made the show – hats off to the production team too. Instead of your average back-drop, a projector was used to portray the iconic lift scenes. When Baby and Johhny practiced lifts in the water and the grass, it felt utterly real to the audience. The projector gave these scenes an authentic feel, something that made the whole show.

By the time the cast took their final bow, I was sad to see them leave. This show was a breath of fresh air, and I’m thankful that the world of theatre are finally doing things differently. I was sceptical at first, but I had no reason to be. Of course they took a risk with this show – but it paid off.

Find tickets for the remaining dates of the Dirty Dancing tour in Glasgow at www.atgtickets.com

Mikhaila's studying at Strathclyde Univeristy, dreaming of a career in journalism. She loves books, baking, music and fashion.