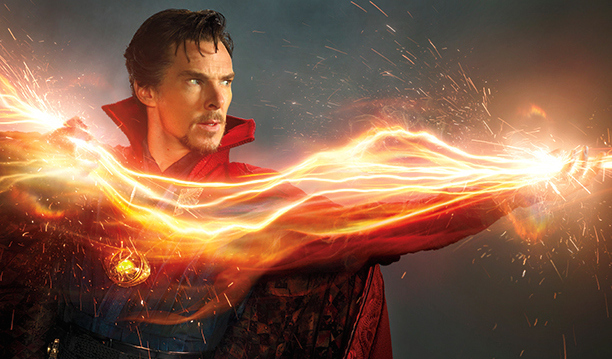 When Benedict Cumberbatch was cast as Marvel’s Doctor Strange, a few eyebrows were raised. Could the British favourite make it as a superhero? Or would he just be Sherlock in a cape?

The good news is that Benedict takes this role and makes it his own – he even sticks to the American accent which, while it slips at times, isn’t his worse, and he makes a pretty convincing hero.

Doctor Strange is the title character’s origin story – and a great set up for what promises to be an exciting series from Marvel. Cumberbatch plays Dr Stephen Strange, a New York neurosurgeon at the top of his game who finds himself in a serious car accident which badly damages his hands. Serious nerve and ligament damage means the doctor has uncontrollable tremors, halting his medical career. He spirals into depression, desperately trying to come up with an answer.

He comes across a man who was once paralysed from the chest down and can now walk – and heads to Katmandu in search of the people who helped cure him.

What he finds is The Ancient One (the ever-brilliant Tilda Swinton), who leads a band of sorcerers using magic to protect the world from evil forces – a far cry from the science that Strange is so familiar with. He watches as the sorcerers manipulate their surroundings and create weapons out of thin air, deciding he wants to get on board.

Kaecilius, a former master sorcerer turned rogue, is on a mission to use his powers for evil, summoning  Dormammu of the Dark Dimension in search of eternal life – with the potential to destroy earth in the process. It’s up to Doctor Strange, along with fellow sorcerer Karl Modo (Chiwetel Ejiofor), to try save the day.

Cumberbatch does well as a superhero – for a skinny British man, he actually fits the role really well. He’s not particularly likeable at the beginning – he’s got a bit of Tony Stark swagger about him, but not particularly nice with it. Once he gets into the magic though, a wit and warmth emerges as it’s revealed that, actually, this self-centred surgeon cares about more than just himself. Swinton is also excellent as The Ancient One, performing incredible spells and bringing a bit of humour too.

But the most impressive part of this film is the special effects. Prepare to be wowed as New York city is folded, multiplied and tipped upside down by magical forces – it’s all very Inception, but in the very best way. It’s truly spellbinding.

This is a pacy, smart superhero movie that’s got its fair share of laughs, incredible action scenes and visual effects that’ll blow your mind. Stick around for the credits too for not one but two extra scenes – and a great big clue of what’s to come next from the Doctor.