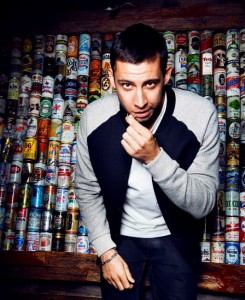 When it comes to gigs, the audience tends to spilt into three distinct groups. First come the ‘bar lot’ who can be found, well, at the bar, nodding along to the music. Second come those who hover by the walls in an attempt to avoid the dreaded pit-circle, and last, but not least, come the ultimate enthusiasts. Ultimate enthusiasts make their way to the centre of all action, acknowledging every note played and every word sung – and anyone at Example’s gig on Saturday night could be labeled as such. Every soul from the front to the back of the venue was consumed with energy as the London-born act filled the atmosphere with positive vibes and charisma.

Elliot John Gleave, as he’s known to his folks, hit the music scene back in 2004 under the pseudonym of Example, which comes from his initials – E.G. Yeah, we were pretty amazed when it clicked. Since his debut, he’s been a key figure in the world of electro, teaming up with the likes of Calvin Harris and playing at arena tours nationwide.

This weekend, however, Example was back to his roots, playing his favourite small venues on the Ulitmate Weekender tour. Over the course of three days, he did six gigs in six venues – two in London, two in Manchester and two in Glasgow, wowing fans with a live performance and DJ set in each. We manage to bag tickets for his energetic live set at Glasgow’s Garage.

Getting us all in the Saturday night spirit, We’ll Be Coming Back kicked things off and Mr EG – is it OK if we call you that? – needn’t have bothered bringing a mic on stage with him. As the audience audience took over lead vocals for the majority of this song, they jumped and danced and jumped some more before grabbing a quick breather at the gig’s halfway mark, where a tempo change gave way for some slower numbers.

Example certainly knows how to keep an audience on their toes, between cheeky waves to individual crowd members and non-stop levels of energy there wasn’t one person who could have found this show dull. Continuing the set with ease, while giving all gathered at Garage’s intimate space many a chill-on-the-back-of-the-neck moment, Example had the crowd in awe as they sang along to favourites such as Changed The Way You Kissed Me and All The Wrong Places.

Although armed with a five-disc discography, the set was a little short at just an hour and a quarter. But those eager for more were likely to carry on the fun at the Arches, where the DJ set after party frolics were undoubtedly in full swing after the perfect warm-up.