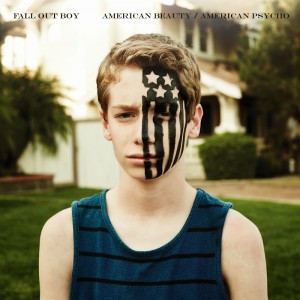 Flashback to 2009 and you may recall the beginning of a three-year hiatus from the band that brought us hits such as Sugar We’re Goin’ Down and Thnks Fr Th Mmrs. Fans were beginning to lose hope and wonder if they’d ever hear another hit from the four-piece again. Flash-forward to 2015, and Fall Out Boy have finally released their sixth album. Following up from their 2013 come-back album, Save Rock and Roll, new release American Beauty/American Psycho puts a new spin on the rock genre, and much, much more of what FOB fans know and love.

Unbelievably, the record opens with the sound of a trumpet. Not typically an instrument you’d associate with a rock band, but Fall Out Boy aren’t the type of band to stick to the rules. The beat soon kicks in with opening track Irresistible and soon enough Patrick Stumps’ distinctive vocals are captivating the audience.

The following track, American Beauty/American Psycho, is definitely one that you can’t help but move your feet to, while the first single from the album Centuries sounds like it would fit in perfectly with their previous album.

One of the tracks that sticks out the most is Uma Thurman. Titled after the actress, the band have revealed that the song references the film Pulp Fiction. The song is also very much inspired by the theme tune of TV show The Munsters.

The pace changes on track Jet Pack Blues with a much slower beat but soon becomes what can only be described as more angry on Novocaine as Stump belts: “I am your worst nightmare.” Favourite Record can definitely be categorised as one of Fall Out Boy’s catchier tunes before the band tell us that “we could be immortals” in the track titled Immortals which also features in the upcoming Disney film Big Hero 6.

The album closes with the mysterious and slightly creepy sounding Twin Skeletons (Hotel In NYC) where Stump further proves how versatile his vocals really are.

Fall Out Boy have yet again proved that they mean business when it comes to making a record. They have given meaning to the term ‘modern rock’ and have shown that despite being older and more mature than they were back in the days of Take This To Your Grave they still know how to kick it. Fall Out Boy really are making sure that they’re remembered for centuries.