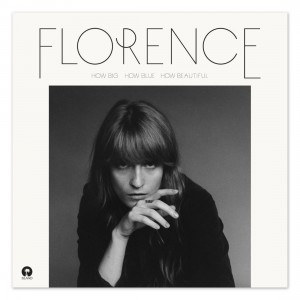 When a band hasn’t released an album for three and a half years, you expect their new music to be amazing, right? After all, they’ve had long enough to work on it.

Those where my exact thoughts while waiting for Florence + The Machine’s new album; but sadly, it didn’t live up to expectations.

After her previous two albums, Florence Welsh became known for her melodic voice and captivating lyrics. Her latest work, How Big, How Blue, How Beautiful, also showcase these talents – just not to the same extent.

Of course, the album does have some catchy songs, with the likes of Ship to Wreck, What Kind of Man, and Delilah being my personal favourites. These songs showcased angelic vocals and talented song writing skills. Florence’s songs are always amazing paradoxes: her velvety voice is so calming that it could lull you to sleep, but the loud and rhythmic instruments used won’t let that happen. If more of the songs on the album had been like this, it would have been a complete success.

It’s not that the album was bad – it was fine, really. But is “fine” good enough for a Grammy-nominated artist? Of course, it would be difficult to follow up huge hits Spectrum, You Got the Love, and Never Let Me Go. But, in my opinion, no song on this album even came close to her former hits.

For starters, the songs were far too long, with most lasting over four or five minutes. What Florence lacks for in lyrics she makes up for in large instrumental sections. The songs themselves are decent – but they just don’t make me feel anything. For instance, when I first heard her former hit Shake it Out, I almost cried. The song was so truthfully sad and uplifting at the same time – a bittersweet ballad about overcoming your demons. Dog Days are Over was equally emotional, but had a more happy, positive vibe that made everyone want to get up, dance, and just be free. So why couldn’t there be any songs like these on the new album? In all truthfulness, I just couldn’t see any big hits coming out of this album – or at least not as big as her previous ones.

Don’t get me wrong, I love Florence + The Machine’s music, and have huge respect for the band. I’m already eagerly awaiting their next album – in the hope that it will be better than this one.

Mikhaila's studying at Strathclyde Univeristy, dreaming of a career in journalism. She loves books, baking, music and fashion.