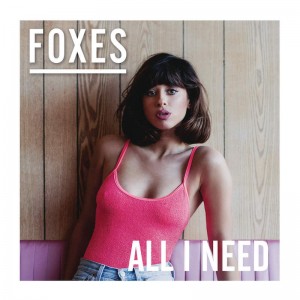 After making her first appearance on the pop charts alongside award-winning producer and DJ Zedd with  Clarity, Louisa Rose Allen, better known by her stage name Foxes, has made a name for herself in the music industry, quickly becoming a firm favourite with pop fans who are looking for more than a catchy chorus and a repetitive dance beat

Her debut album Glorious in 2014, featuring Youth and Let’s Go for Tonight, showed the world what she has to offer; catchy synth-pop songs with personal, meaningful lyrics accompanied by her husky, yet powerful voice.

Starting the album we are met by a forty second intro combining a number of violins and synthy dance beats that climaxes into the great vocal track, Better Love. A song about heartbreak, it quickly sets the tone of the album. The catchy chorus sees Foxes sweet voice being accompanied by a chorus of singers, which at the end leaves the impression of Bastille’s Pompeii.

Better Love is followed by the hit single released in summer 2015, Body Talk. This synth-pop song has clear influences from the 80’s, which is accompanied perfectly by the 80s style music video with the classic cars and big hair.

Foxes previously stated that in her second album she wanted to do something a little different, and that was apparent with poppy tropical tones in Cruel and the pretty Wicked Love. Though these songs are great pop, the choruses of each song take a step away from Foxes’ usual experimental pop tracks.

The album’s upbeat sound is well balanced with slower ballads such as If You Leave Me Now and On My Way. Showing off her powerful haunting vocals, the tracks continue the albums theme of going through a break up and adapting to being single.

Tracks such as Amazing and one of the albums stand out tracks Feet Don’t Feel Me Now, are brilliant feel-good songs that make the balance of her slower ballads even better. Allen seems to have a knack for writing catchy songs that make you want to sing at the top of your lungs whilst dancing around with your friends.

The personal track Devil Side shows a rockier, sultry side to Foxes, and breaks up the album perfectly. Unlike some albums, no tracks sound the same and have their own unique sound and catchy chorus that will have them stuck in your head all day.

This album is a testament for Allen’s talent as a writer; displaying her ability to write catchy pop songs which are also personal with meaningful lyrics. Foxes has changed up her sound in subtle ways with this album, with less influences of dance music, however has continued to turn sadness and heartache into fun songs everyone wants to dance to.