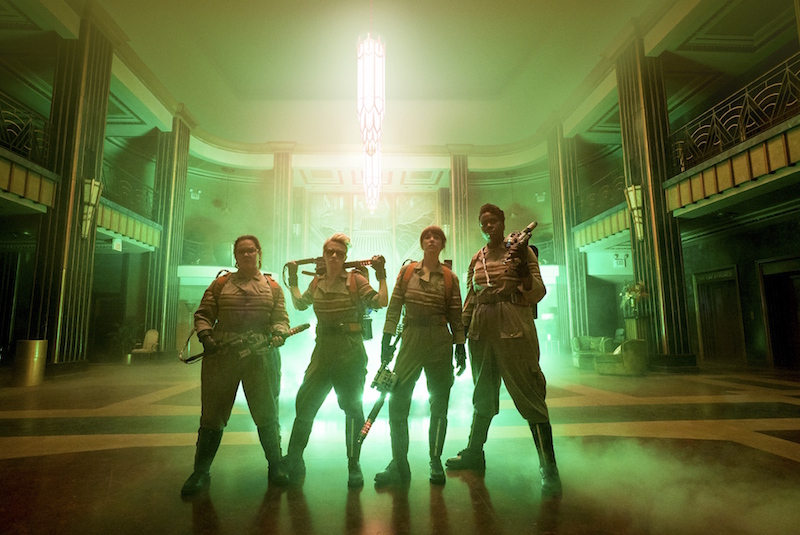 As far as reboots go, Ghostbusters has maybe been the most controversial – and possibly for the most ridiculous of reasons.

When it was announce two years ago that the 80s classic was getting a 21st century makeover, fans the world over starting angrily bashing at their keyboards in dismay at the thought of their favourite film – their childhood – being taken away from them. Because – wait for it – this wasn’t just any old remake. This was Ghostbusters with WOMEN.

And I hear you to a point (although definitely not about the female casting part). We don’t really need to re-do every movie going. But when you do a remake with an original story, first class cast and amazing cameos like this? It’s more than OK.

Ghostbusters is, in a word, fantastic. For 2016, we’ve got a quartet of supremely funny comedians taking on the ghosts of Manhattan – Melissa McCarthy, Kristen Wiig, Kate McKinnon and Leslie Jones – with laugh out loud funny results.

Wiig plays Erin Gilbert, a straight-laced scientist gunning for a coveted tenure spot at the prestigious Columbia University. Her dreams are shattered, however, after she sees a book she wrote with old pal Abby Yates (McCarthy) is still in circulation – and it’s all about how ghosts are real. She meets up with Abby to get her to pull the book – and ends up on a ghost hunting expedition, video evidence of which goes online and loses her her job. Erin teams up with Abby and her off-the-wall nuclear engineer pal Jillian Holtzmann (wild-eyed Kate McKinnon) to start exploring the paranormal once more – with amazing, ecto-plasm soaked results. The trio are later joined by Subway worker Patty Tolan (Leslie Jones), a wise-cracking New Yorker with incredible knowledge of the city and even better ear rings.

And they’ve got their work cut out for them. Hotel janitor Rowan, a basement-dwelling odd-bod, is on a mission to take over New York with evil spirits – and it’s down to the Ghostbusters to get them under control. Armed with an arsenal of clever ghost-catching gadgets from Holtzmann, the ladies get to it – with magnificent, laugh out loud funny results.

Director Paul Feig has worked with McCarthy several times over the years, including smash hit Bridesmaids, and he knows ho to get the best out of her and her fellow funny women. The casting in Ghostbusters is top notch – but it’s perhaps Kate McKinnon who stands out the most, playing the unpredictable Holtzmann. Her off-beat one liners really make this movie. Jones, too, puts in a great performance in her big screen debut. Thor star Chris Hemsworth also puts in an appearance as impossibly handsome but incredibly dim receptionist Kevin, and proves that he has a knack for comedy too – he’s responsible for some of the more obvious laughs of the movie.

Throw in some great cameos from the original cast (“Hey!! It’s HIM!”), a nod to original Ghostbuster Harold Ramis and some impressive ghostly special effects and we’ve got ourselves a hit.

Best of all, the 2016 incarnation of Ghostbusters proves the doubters wrong. Because, yep, you guessed it – ladies can be funny. They can make fart jokes and be brilliantly clever at the same time. This is the movie that little girls have been waiting for – no wide-eyed princesses or tales of chasing after handsome princes. Just four female friends kicking some serious butt and bringing huge laughs at the same time. If you ask me? That’s the sign of a brand new comedy classic.

Seen the new Ghostbusters reboot? Tell us what you thought on Twitter.