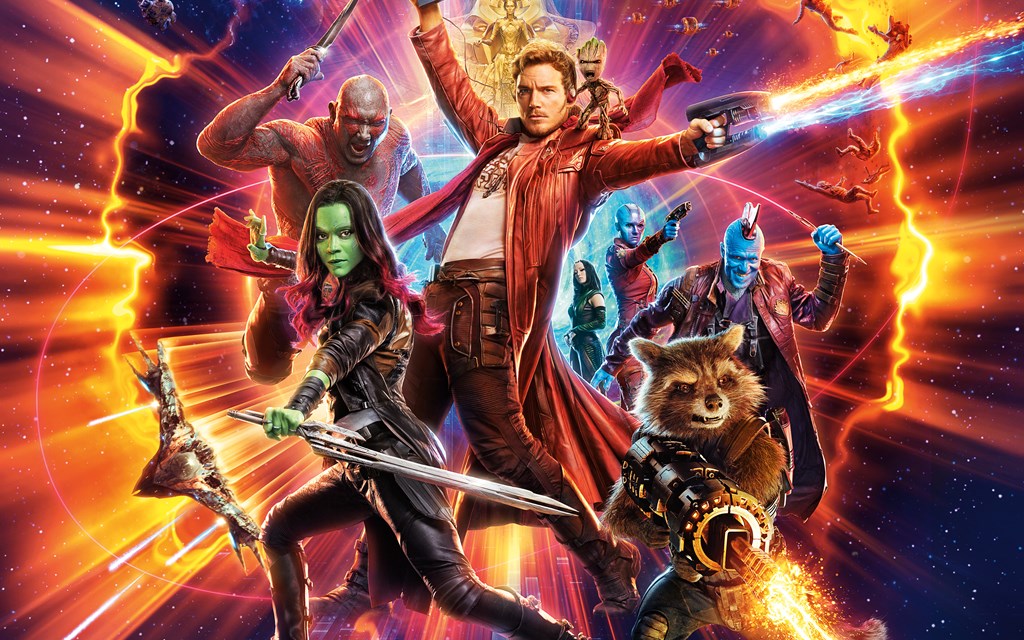 Find me a man who doesn’t love Chris Pratt’s Star-Lord, and I’ll show you a liar.

I may be biased because I’ve had big love for Chris for a long time (harking back to his chunkier days as Andy Dwyer in Parks and Rec), but the guy is nothing short of brilliant, as the latest instalment in the Guardians of the Galaxy series shows.

Peter Quill, aka Star-Lord, is back with his band of unlikely superhero pals for another mega space adventure. This time, Quill, Gamora, Drax, Rocket and Baby Groot (he’s regrowing after the 2014 movie – and he’s very, very cute) get off to a rocky start after Ayesha, leader of the Sovereign race, hires the gang to protect some valuable batteries. Which Rocket, of course, decides to steal after an impressive opening fight scene (dominated by Groot dancing to Mr Blue Sky). Ayesha isn’t happy, and goes after the Guardians – leading them to find Quill’s dad, Ego, played by Kurt Russell.

While Quill, Gamora and Drax head off to find out more about Ego, Rocket and Groot stay behind to mend the ship, keeping an eye on Nebula, Ayesha sends Yondu and his crew out to get them. They capture Rocket and Groot with the help of Nebula, and then turn on Yondu. The trio realise that Quill and co are in danger and try to stage an escape.

Because Ego isn’t all he seems – and it’s only a matter of time before the Guardians have to save the galaxy all over again.

All in? It’s just as much fun as the first outing for the Guardians. The CGI work is fantastic, and the comic book/cartoony style makes for a brilliant escapist romp. But despite the special effects, the brilliant cast steal the show every time. From badass Gamora to straight-talking Drax, heroic Quill to prickly Rocket, they’re a flawed bunch with lots of heart – and lots of laughs too. And Baby Groot is the cutest thing ever to happen to cinema.

As last time, the soundtrack is a belter, with sunshine-infused, upbeat tracks from the 70s and 80s dominating major fight scenes and leaving you tapping your toes along in the theatre.

It’s got action, laughs, plenty of drama – it’s everything you want in a comic book movie and then some. Definitely one to watch.