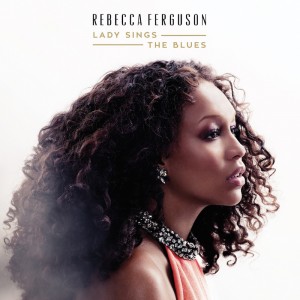 I remember watching Rebecca Ferguson on The X Factor in 2010 and being annoyed that Matt Cardle who claimed the title. Since then, she kind of fell off the radar for me. I didn’t really hear her debut album, Heaven or her second album, Freedom. However, I’m glad that I’ve had the chance to listen to new release Lady Sings the Blues.

One of the things I really like about Ferguson is the distinct and unique quality that her voice has. It’s both husky and smooth and I’m glad it hasn’t been compromised in any way. Her voice is ideally suited to the genre of this whole album, which is best described as the deep American south meets gospel choir meets old Hollywood glamour.

Get Happy is a really good track. It’s the first on the album and was released as a single last week. It’s upbeat and makes your toes wiggle. I also really enjoyed her cover of Summertime. I’ve always liked that song and her voice is powerful and soulful. The title track, Lady Sings the Blues, has a small part in it that reminded me straight away of James Bond which made me smile.

While it’s obvious that Ferguson is channeling old school soul, the album does get a little repetitive. There isn’t a lot of variety and the songs seem to blend into one another. There are a couple of songs where it goes too far from jazz and into Disney territory which I didn’t really like. I think the album is nice as a tribute to an important era of music but as a modern album, there doesn’t seem to be a lot original about it.

That’s not to say that Ferguson isn’t talented. She has an incredible voice and I’m glad that she has continued to make music long after The X Factor. I just wish that this album had made a bit more of an impact on me.