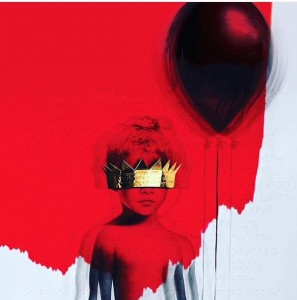 The problem with ANTI is that it it is actually a really great pop album, it’s just a bad Rihanna album. In a career that has spanned 13 years, 8 albums, 35 worldwide No 1’s and hits such as Diamonds, Rude Boy and Only Girl, ANTI comes as the ultimate anticlimax.

There’s no standout track here; no pop anthem that will blast out of shops and taxis and become lodged in your brain for the next six months as per her usual hits. Instead what Rihanna has made is a quietly experimental album and perhaps most shockingly of all: a respectable album. The kind that a new and upcoming artist would strive to make. Except Rihanna is no up and commer.

ANTI – which is produced by the King of the Controversial, Kanye West – seems to be Rihanna’s stab for credibility. It’s a mix of cutting edge R&B and old school motown which presents her crackling and mature voice to flawless effect. But ANTI it is far from what we’ve have come to expect from the outrageous grinding, diamante encrusted superstar. Four years since her last release, 32.9 Instagram followers and dozens of half-naked twitpics later, the archaic pop princess’s latest album barely raises an eyebrow.

The issues with ANTI began way before it’s release. For the past year Rihanna taunted fans with artwork, promotional campaigns and a smattering of singles without a hint of an album. Then on Thursday morning ANTI finally appeared (accidentally, as rumours have it) on streaming service Tidal, only for Rihanna to then go on a distribute it for free via iTunes later that day. To say it’s release was shambolic barely covers it.

Yet the album starts out strong. Consideration, is sassy and dreamlike, with Rihanna swaggering along to the words “I’ve got to do things my own way, darling.” And then, unfortunately it goes downhill from there. At best it will make good background music for a hair salon and at worst it’s so laid back it feels unfinished. Half the tracks are begging for a remix, particular since most of them are under three minutes long. The lead single Work, featuring Drake, sounds like it was made in a haze of marijuana and then discarded halfway through. In fact,  that’s what most of the album sounds like.

The real let down of this album is only highlighted by the endless waiting — Rihanna’s last album came in 2012. And in an industry that sees artists release tracks unexpectedly overnight or sensationally before death, drawing out a release in the such a painful way almost sets it up for failure. While ANTI is  admirably experimental (if oddly downbeat) it’s not enough to satisfy the hyped up fans hungrily awaiting its release. In a world of Swiftmania and Beyoncé’s rule, we have more access to stars than ever before. Waiting four years for the album of one of the world’s biggest singers now seems unthinkable, and begs the question:  if we all have as many hours in the day as Beyoncé – what the hell has Rihanna been doing the last few years?