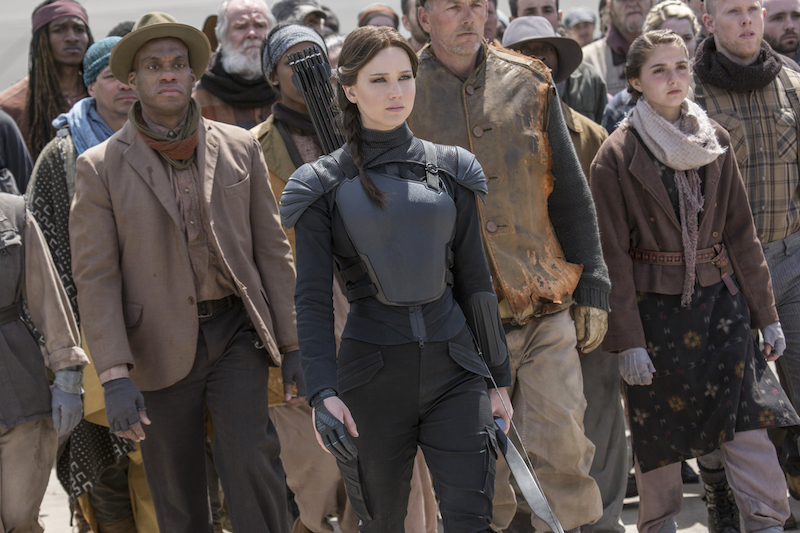 It takes a lot to get me off my sofa these days. Thanks to Netflix and shows like Jessica Jones and Game of Thrones, we don’t have to leave our cosy living room to enjoy a rip roaring cinematic experience.

But for those clutching well-thumbed copies of Suzanne Collins’ celebrated trilogy, impatiently waiting for the final installment of the Hunger Games series, the release of Mockingjay Part 2 will be met with a flurry of excitement, bated breath and significantly high blood pressure.

For everyone else, I’ll be honest, you are going to have absolutely no idea what the hell is going on.

Those without any background knowledge hoping to catch up in some “previously on Homeland” manner will be slightly disappointed, if not severely confused. Though I had seen the first three films, I spent the at least 30 minutes squinting to recognise the major characters and painfully trying to recall what happened in the last movie. No such luck. Instead we are catapulted straight into the action.

Katniss (played by Jennifer Lawrence) is straight out of her neck brace and back into battle. Bow and arrow in hand, she stalks across the screen leading her army through Panem’s derelict wasteland on a mission to assassinate President Snow – a camp, semi-chirpy blend of Santa, Simon Cowell and Karl Lagerfeld.

Even outside the Hunger Games stadium, the team once again find themselves pawns in Snow’s twisted games – sluggishly crawling through an urban maze (looking very Yeezy Spring 2016) they are forced to dodge obstacles at every turn.

The problem is mostly everyone just seems a bit bored. Even Oscar bait de jour JLaw struggles to muster any real enthusiasm for the whole thing. Similarly Snow, who in previous films had been quite convincing, seems to have given up playing the dastardly villain. His behaviour is slightly more akin to an erratic party planner  – fretting more about floral arrangements and vol-au-vents than showing any real concern for JLaw’s plans.

Still, he manages to drag himself away from his sprawling Versailles mansion long enough to lay out a series of  terrifying threats around the city, including “mutts”, oversized verruca socks with teeth,  that rise up out of the sewers to attack Katniss and her gang. The movies’ highlight sees the soldiers scrambling to outrun an ocean’s worth of inky black oil that pours mercilessly out of the abandoned buildings. But apart from that, nothing much else happens.

The subplot of Kanniss’ ongoing love triangle is similarly lackluster. Are we really to believe that pint-sized Peta and his frosted tips actually stand a chance against a brooding Liam Hemsworth?

Though this might be the grand finale die hard fans were waiting for, the problem for me is that, after four years and countless copycat series, Mockingjay just doesn’t cut it when it comes to waking me from blockbuster fatigue.