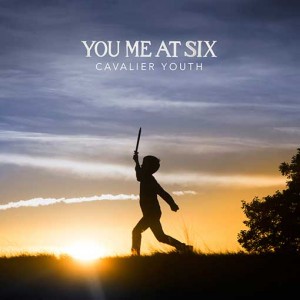 Once upon a time, boys with floppy fringes and a passion for singing about how much they hated their ex-girlfriend dominated Myspace alongside solemn-looking selfies and the infamous internet term “pc 4 pc”. Amidst this trend, five boys known as You Me At Six uploaded a song called Save It For The Bedroom which got so much hype and internet plays before a record deal had even been signed, they needn’t have bothered putting in any effort into their debut album – Take Off Your Colours was set to sell the second it was released.

Eight years and three albums later, the Surrey boys are back with a fourth record and although it’s unknown how much work went into the first CD – yes they were still a thing back then – any lack of elbow grease has certainly been made up for with this one. However there’s such a thing as trying too hard when it comes to music and that’s Cavalier Youth’s main problem.

Kicking off in traditional YMA6 manner, the album opens with catchy riffs and Too Young To Feel This Old is definitely a song for fans who grew up listening to the band and are now at that stage in life where they feel should have a plan, but still favour their prime. Put that with the album’s title and listeners are set into a false sense of security as they gear up for a range of forever young themed poppy sing-alongs, which aren’t there.

A grown up approach to writing is seen a quarter of the way through and suggests the band were going for a maturer Brand New style sound. Except it hasn’t worked out as well as it did for Brand New. The songs don’t flow together as well as they did on previous records and although it’s important to mix up-tempo and ballad tracks, the balance just isn’t right. The tone of the album is unclear and because there’s so much focus on trying to showcase musical influences, the doses of originality that are present are overshadowed.

Songs that do stand out are Carpe Diem and Wild Ones and would be closely followed by Lived A Lie and Be Who You Are if the latter didn’t end abruptly after 1.49 minutes and the former wasn’t a copy-cat version of Welcome To The Black Parade by My Chemical Romance when it reached 1.43. Nonetheless, each of these render what YMA6 do best, and that’s creating a catchy tune guaranteed to be stuck in anyone’s head all day.

Although Josh, Matt, Max, Chris and Dan’s music was once going to have them live happily ever after complete with floppy fringes and hundreds of MySpace friends, like any other trend these are diminishing. And by the sound of Cavalier Youth, so are You Me At Six.