This week is Scottish Apprenticeship Week, an initiative that highlights the opportunities and benefits that Modern Apprenticeships bring to businesses, the economy and most importantly, young people like you! It wasn’t that long ago that teenagers would leave school at sweet 16 and walk straight into an apprenticeship, such as welding or engineering, and have a job for life. These days, Modern Apprenticeships vary from administration to youth work. We caught up with three young Scots working in very different fields to find out how their MAs are going so far. 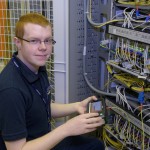 Robert, 23, went to North East Scotland College to complete an HND in computing. Once he had completed his diploma, he chose a Modern Apprenticeship with global telecommunications company BT over a university course.

“I applied for the apprenticeship with BT because it not only offered me training, but it meant there was a guaranteed job. I liked the security of that because some people go to university for four years and then struggle to find work,” explained Robert.

“I also really enjoy my work, especially meeting our customers, which is brilliant.”

Robert, who is working towards his Level 3 ICT apprenticeship, envisions a long-term future at BT and promotes the company’s apprenticeships to college students.

“I think sometimes people in Aberdeen think they have to look at jobs in the oil industry. I would say to anyone not sure about what to do, they should take a look around the city and see what else is on offer before making up their mind. There is no rush and there are a lot of options out there, including Modern Apprenticeships.” 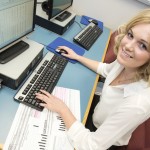 Demi, from Kelso, began working on the factory floor at electronics manufacturing company Plexus, where she tested circuit boards.

“When I was at school, I thought about going to university but I wanted to get a job and start working.”

Keen to improve her skill set, Demi asked her employers if she could do a Level 3 business administration qualification, which they accepted.

During her apprenticeship, she impressed her employers so much that they gave her the opportunity to apply for a promoted post as an associate buyer, the job she’s now working in and enjoying immensely.

“Modern Apprenticeships offer opportunities for staff to develop skills and get qualifications while working and earning.” 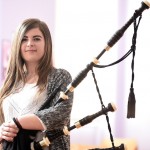 Bagpiper Eilidh, 18, started playing the bagpipes when a tutor visited her primary school, Prestonpans Primary, and asked who would like to learn how to play.

Several years down the line, Eilidh finds herself working with the same tutor at her former secondary school, Preston Lodge High, in Community Arts Management for the Scottish School Pipes and Drums Trust.

Eilidh is involved in the administration for the pipes school, as well as tutoring pupils during term times and working with community groups in Easter and summer schools.

Her tutor, Lee Moore, said Eilidh excelled as a primary seven pupil and he was keen to support her musical development.

“When Eilidh was thinking of leaving school I asked if she was interested in teaching the pipes and got things organised through the Modern Apprenticeship programme. We have 70 pupils and they each get a weekly lesson at one of the four local primaries and a high school in our area,” explained Lee.

Eilidh is flourishing in her role which brings together her love of the pipes, learning new skills and encouraging young people to play music.

For more information on undertaking a Modern Apprenticeship this Scottish Apprenticeship Week at www.scottishapprenticeshipweek.com, or get in touch with Skill Development Scotland, www.skillsdevelopmentscotland.co.uk