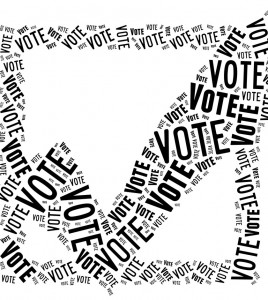 The Scottish election is just weeks away – meaning the deadline is looming for voter registration!

If you’ve never voted before, you can’t just turn up at your nearest polling station on the day of the parliamentary vote. You have to be registered first. So how do you make sure you’re registered? How do you go about it if you’re not? What’s even the point in voting?

We’ve got all your voter FAQs answered.

In a Scottish election – at parliamentary and local elections – anyone who’s over the age of 16 can vote. You’ve also got to be a British citizen or a Commonwealth citizen with leave to remain in the UK, or a citizen of another European country – and registered to vote in Scotland.

If the vote taking place is for the whole of the UK (like the EU referendum in June), you’ve got to be over 18.

How do I know if I’m registered to vote?

Simple – call your local voter registration office! By now, you should have received a polling card through your door telling you where to go vote and when. If you don’t have one – first, check with your parents to see if they’ve swiped it, and then get on the phone to the voter registration office to see if you’re registered. You can get the details at www.aboutmyvote.co.uk.

How do I register to vote?

If you’re not already registered, it couldn’t be easier. Just head to www.gov.uk/register-to-vote. It’ll take you all of five minutes, and you just need to pop in a few simple details like your date of birth, your address and citizenship. You could do it while you’re waiting on the ads loading on All4 to catch up on Tattoo Fixers. It’s that straightforward. You must be registered vote by 18 April 2016 to take part in the Scottish election, so get on it now.

What’s this vote for?

This vote decides who represents us in the Scottish parliament. It’ll select the 129 elected MSPs. Each Scot is represented by eight MSPs – one for their constituency and seven for their wider region. Which ever party gets the most votes gets the overall majority, led by the First Minister – the head of the party in power. Different ministers have different roles and responsibilities, and areas which they are in charge of like sport or environment.

To say ‘it’s your civic duty’ really isn’t enough. The Scottish parliament is in charge of a series of ‘devolved issues’, including economic development, farming, education, housing, law and order, planning, sport, the arts, tourism, local government, police… A massive range of important issues in everyday life that really matter to YOU. So you want to make sure you’re voting for people who represent your beliefs and interests and who will do their bit to make positive changes in Holyrood and therefore benefit your wants and needs.

There’s a bunch of other issues that Scotland’s MSPs still don’t have a say over – these are called ‘reserved matters’ and are dealt with by MPs in Westminster. However, there’s still so much up for debate here in Scotland that your vote – and your voice – will make a difference.

And if the MSPs decide to do something you don’t agree with or your preferred party didn’t get in and you didn’t bother to turn up and vote? Well, you don’t really have a right to complain.

How do I decide who to vote for?

We can’t help you with that – but you can head to the different parties’ websites and check out their manifestoes. These outline what the part propose they’ll do during their four-year term in parliament, from policies on education to tuition fees, policing to the economy. You might not understand all of it, but it’s worth having a read through the bits that do impact you now, and doing a bit of research.

Find out more about the main political parties and who’s standing for election in your area by following the links below:

How does the vote work?

On election day, you’ve got two votes in a Scottish parliamentary election.

When does the vote take place?

How do I vote?

What if I can’t get along to vote?

You can register for a postal vote if you can’t make it to the polls – if, say, you’re on holiday. You can download a postal vote form at www.aboutmyvote.co.uk and you have to make sure it’s with your local electoral office by 19 April at 5pm.

So there we have it! It’s really important to use your vote this May, to make sure Scotland is truly represented in the halls of Holyrood. The Scottish election matters – so get your voice heard! Get your finger out, make sure you’re registered and use that all important vote on the day! Your vote matters – so use it. Don’t lose it.