Want to study in Scotland but can’t decide where? We totally understand the difficulty of choosing where you’ll spend the next four years of your life so we’ve compiled a list of all the universities in Scotland to help with your decision. Although universities offer a wide range of courses, some of these educational institutes are known for specific degree subjects, so to help you narrow your search we’ve included where the universities rank in Scotland with regard to the degrees you can study. 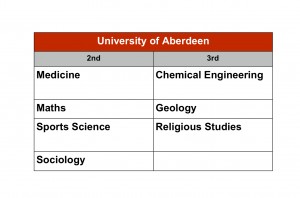 Founded in 1495, the University of Aberdeen offers an impressive 600 first degree programmes. This is Aberdeen’s first university and is accredited in courses in medicine and engineering. The oil capital of Europe, Aberdeen is also popular with engineers and business students.

First established in 1888 as Dundee College of Technology, the University of Abertay was born in 1994. A fairly new higher education establishment, Abertay has wasted no time establishing itself within the education community and was the first university in the world to offer a computer games degree.

In 2008 Glasgow Caledonian University won the Times University award for outstanding international student support and only two years later was ranked within the top 400 universities of the world. This is pretty impressive since it was only established in 1993 after a merger with Glasgow Polytechnic and The Queens College. In June 2011 the university opened The Scottish Ambulance Academy, a facility that provides training for Ambulance Technician and Paramedic students on behalf of the Scottish Ambulance Service. 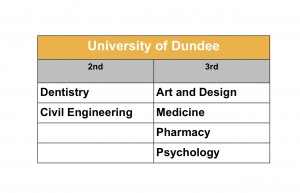 The University of Dundee was rated this year by students as number one in the UK for student experience. The university is particularly acclaimed in engineering, medicine and art. 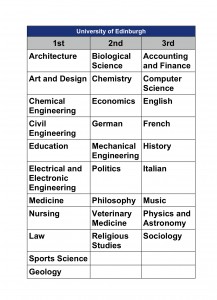 Situated in the capital of Scotland, the University of Edinburgh, founded in 1583, is regarded as one of the most prestigious universities in the world. The university receives a whopping 47,000 applications every year so places are extremely competitive. 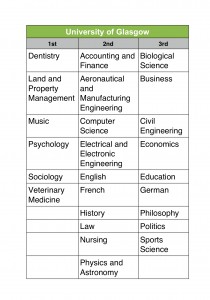 Founded in 1451, the University of Glasgow is ranked in the top 100 universities in the world. The university hosts over 23,000 students every year but is spread of a number of different campuses, so there’s no reason to feel worried over overcrowding.

Scotland’s only independent art school offers an array undergraduate and postgraduate creative courses including art and design and architecture. Founded in 1845, this establishment only has around 2000 students a year due to its specialisation in the arts. The school works closely with the University of Glasgow who validate their degrees. 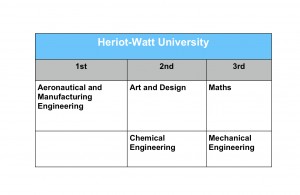 One of Edinburgh’s three universities, Heriot Watt is known for having strong prospects of its students, with 80% graduate level jobs six months after leaving the university. The university was also named Scottish University of the Year 2011/2012 by the Sunday Times and is a leader in engineering and food science.

University of the Highlands and Islands

The newest higher education institute in Scotland, the University of the Highlands and Islands only found its status in 2011 after the merger of 13 colleges and research institutions. With a student population of around 5000, the university has a number of undergraduate and postgraduate programmes from Engineering to Music and Business. From Shetland to Argyll, UHI have campuses stretching right across Scotland.

Another university situated in Edinburgh, Queen Margaret University was granted its university status in 2007 but was formally founded in 1875 as The Edinburgh School of Cookery and Domestic Economy. Queen Margaret is a particular leader in nursing, placing third in Scotland and second in Food Science.

Aberdeen’s second university was founded in 1992 and is more commonly referred to as RGU. the Times Good University Guide named RGU as the best modern university in the UK for 2013. The university comprises of two campuses and has a high employment rate with its graduates. RGU currently sits above Aberdeen University in the league tables. 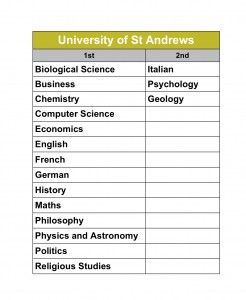 Founded in 1413, St Andrews University in Fife is not only Scotland’s oldest university but it also Scotland’s top ranked university as well as ranking fourth in the UK. A leader institute, St Andrews has strong links to universities overseas including Harvard, MIT and Princeton.

The University of Stirling is home to around 11,500 students and was founded in 1967.  In 2008 the Scottish Government designated Stirling as Scotland’s University for Sporting Excellence and is one of only sixteen universities in the UK with 5-star facilities. Stirling is currently second in Education and third in Communication and Media Studies in Scotland. 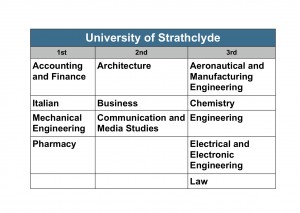 THE (Times Higher Education) university of the year, Strathclyde University is home to a massive 26,000 students and operates over two campuses. Strathclyde was founded in 1796 but wasn’t granted university status until 1964. Strathclyde have recently invested an incredible £300 million to transform its campuses and to improve facilities.

University of the West of Scotland

Established in 2007 after a merger between Paisley University and Bell College, UWS now operates over four campuses in Scotland: Paisley, Hamilton, Ayr and Dumfries. The largest  new university in Scotland, UWS offers over 100 degree courses and was recently granted Skillset Media Academy status in many of its courses including Film-making, Broadcast Production and Performance.

We used The Complete University Guide to gather the information above, but there are multiple other university guides available. Some offer different information and rankings due to the materials used which can include career prospects, grades attained, facilities available and student feedback. The best way to decide which university you would like to study at is to attend one of their open days that they hold throughout the year. This gives you a great opportunity to visit the campus, meet current students and talk to your future lecturers.

Jacquelyn is studying for a Masters in Digital Journalism at the University of Strathclyde. In her spare time she loves indulging in anything fashion, comedy or zombie related. Jacquelyn’s future aspirations include running her own successful magazine publication, writing for Hollyoaks and traveling around the world (in no particular order).

Over to you: Lara Henderson on this year’s exam results