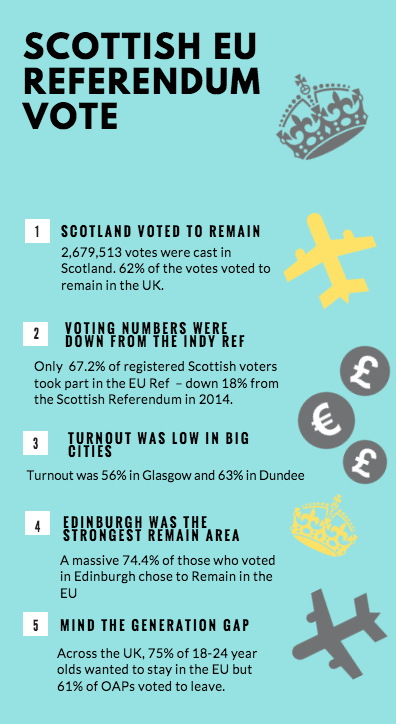 Before the referendum, Remain campaigners voiced concerns that laid-back youngsters would cost Britain its future in the EU, by leaving it to others to vote in the EU Referendum on their behalf.

Now that Britain has voted to leave the EU, with a Scottish turnout of only 67.2%, this fear seems to be realised. But are young voters really to blame?

Throughout the UK, areas with the highest share of older voters enjoyed the highest turnout, helping to shift the referendum toward a marginal win for the Brexit campaign.

In Scotland, voting numbers dropped by 18% from the 2014 Independence Referendum and large cities like Glasgow and Dundee only had a turnout of 56% and 63% respectively.

It’s worth remembering that during the Indy Ref the voting age was lowered to 16 – quite rightly, since it’s the youngest generation that have to live with the consequences the longest. And if social media is to be believed,  Scottish youngsters are more politically engaged than ever.

Young people, even those too young to vote, feel like they have been robbed on the chance to have their say in the future, with angry youngsters blaming the ‘grey vote’ for forcing Scotland out of the EU.

In an age breakdown of EU Referendum polling shows that those under 24 overwhelmingly supported Remain while those over 65 pushed for Britain to exit the EU. 75% of people aged 18-24 claimed they voted for Remain in the YouGov survey after voting closed, a figure that falls as age increases.

In comparison, just 39% of OAPS backed a vote to stay. Now on Twitter teens and young people across the country have united  and are calling out the results for being unfair. “I am utterly gobsmacked and ashamed,” said one Facebook user, while another said the results had “divided a population and further alienated the younger generation who are the lifeblood of the British economy.”

In a speech this morning Boris Johnson said he wanted to “speak directly to the young people” and assure them that they can look forward to a “prosperous future” once “we take back control”. Except now Boris’ word seems about as reliable as Farage’s claim that he didn’t promote lies about the NHS to gain votes (see video below). Instead Scottish youngsters are looking to First Minister, Nicola Sturgeon, for direction. In a speech this morning she called the move to leave Europe “democratically unacceptable” for Scotland. She added: “We face that prospect [of leaving] less than two years after being told that it was our own referendum on independence that would end our membership of the European Union and that only a rejection of independence could protect it.”

She told the press: “Scotland clearly and decisively voted to remain part of the European Union. 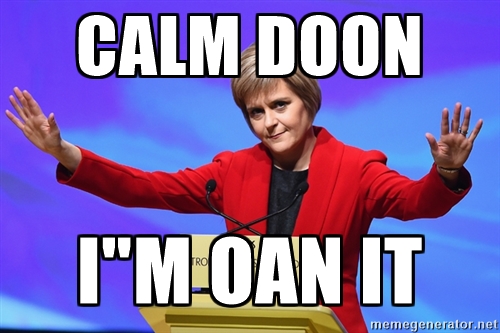 “We’re quite clear, the Scottish Government will protect Scotland’s interests whatever the circumstances and we intend to do that.”

Sturgeon added that a second Scottish referendum on independence was “highly likely” and should be expected with in the next two years. The hope for many is that Scottish independence will allow Scotland to continue it’s membership within the EU.

Teens have taken to Twitter to speak out in support of the First Minister’s plans with the hashtag #indyref2 now trending.

Genuinely got shivers running down my spine and goosebumps everywhere. We could actually do it this time! #indyref2

What are your thoughts? How do you feel about today’s result and would you vote for an independent Scotland? Let us know your thoughts on Twitter!