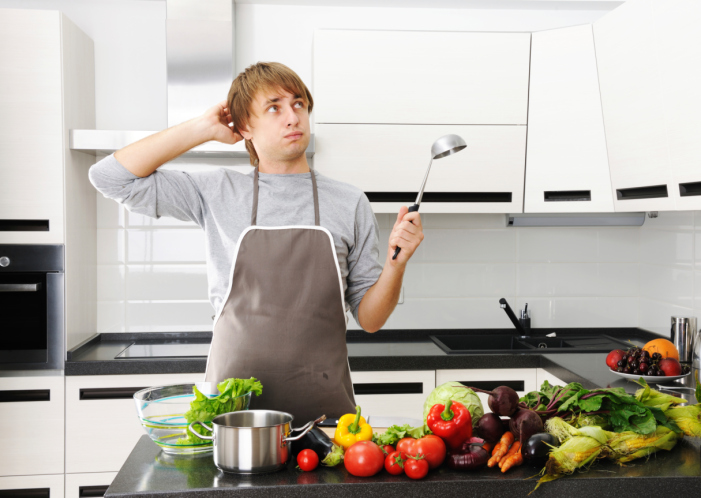 Tim had no idea what a ladle even was

“Emm… Mum, how do you turn on the washing machine?”

Phone calls like these take place up and down the country every September. New university students realise after two weeks of partying and takeaways that clothes don’t wash themselves, as they stand in their last pair of clean pants, figuring out where you put washing powder and what all the flashing lights are before them.

We can laugh at situations like these, having probably been in similar ones ourselves.

A survey in 2012 revealed that one in every three students starting out in higher education is perplexed by the procedure of boiling an egg. Even simpler tasks such as making a pot of tea and buying a train ticket were beyond some new students.

A further 35% of 18-year-olds don’t feel savvy enough to fold and store their laundry, and 42 % wouldn’t know where to start in ironing a shirt.

Of course, we all learn these things over time, but it’s an indicator that living in the “real world” can be a struggle for some people.

What I’m proposing is that schools and colleges need to rethink their curriculum – the stuff that gets taught in class – to include life skills that are essential in everyday living.

It’s all very well learning about algebra, atoms and art, but Scotland’s teenagers are leaving school without the know-how of basic money management, form-filling and career networking.

After several years of looking at obtuse angles and mathematical equations, it’s made me realise that it was ultimately wasted time when I could have been learning about stuff that actually matters in life.

I’m 25, and from memory have wired a plug once using a YouTube video. I have a very vague idea about mortgages, but have no scooby about bonds, rates or inflation.

I have some business ideas, but wouldn’t know how to set up my own business.

The only reason I can cook fairly well is because of the patience of my mother, and when dealing with relationship issues, I’ve done the blokey thing of not asking for help and shouldering the problems myself.

In our fast-paced world, we have fewer opportunities to discuss these practical areas with our parents. Broken families are a reality of today’s society. Jigsaw families, made up of members of previous relationships, are commonplace. Young adults are finding themselves either being forced out of home or eager to leave without knowing the “how-to” of living independently.

Schools need to ditch advanced scientific subjects. Basic DIY, cooking and managing money are much more valuable skills than knowing how to roast a peanut on a Bunsen burner. Knowing where to turn to for relationship guidance is worth its weight in gold compared with understanding the periodic table. Pupils would leave school far more confident about their future, and not find themselves messing around trying to cook a baked tattie in later life.